The stars aligned and I was able to get some pictures before all of the leaves fell off of the trees. It is so beautiful here right now. These pictures don't do it justice at all. 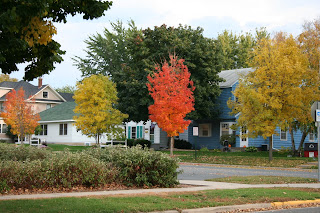 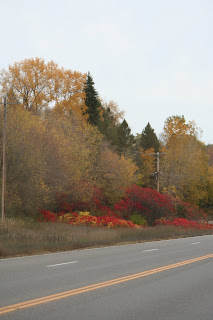 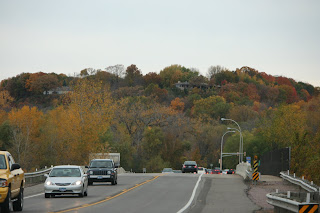 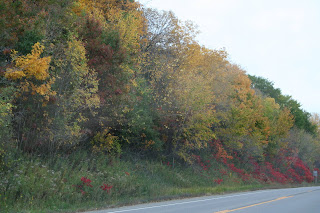 Posted by Chiconky at 8:11 PM No comments:

We've been crazy busy but I wanted to post a quick update since it's been awhile. It's been another fun weekend. The highlights included going to the town's pre-Halloween festival where E had his first experience trick-or-treating, C found a butt-shaped pumpkin, and I lied for a juice box. E and I got up early today to hit the grocery store before the church crowd. He was an absolute monster (I was totally "that mom") but pulled it together with the promise of seeing the fish. We picked up new toothbrushes and he picked out one that sings the Thomas theme song. I thought, "Hey, at least he's excited about brushing his teeth." He's been carrying it around all. freaking. day. I will have nightmares from this song. My kid is the one with the security toothbrush. It was supposed to storm big today so I planned to spend the day in the kitchen. I baked bread for the first time and it was a roaring success! Combined with a super yummy black-bean soup we had a very cozy dinner and pretended that it wasn't 75 degrees out. I also took E to the park earlier and he totally held his own with the older, meaner kids there. At one point I had to tell him "no pushing" but my heart definately wasn't in it. So that's how we're doing. We had a great visit last weekend and are looking forward to our friends coming up in a couple of weeks. Pictures soon!
Posted by Chiconky at 4:45 PM No comments:

My dad came into town at the last minute this weekend. We weren't sure if it was going to work out so we just told E we were having "surprise visitors." He was pretty excited when we picked Coach and Auntie J up from the airport. 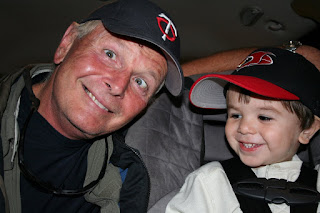 He's been running himself ragged all weekend. I think it'll take most of next week to recover. For now though he's having a great time.

Posted by Chiconky at 9:22 AM No comments: