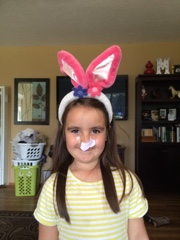 I got steamrolled by a virus over Easter weekend. Luckily I seem to be on the mend just in time for Vegas! C has multiple babysitters and grandparents on speed dial in case he gets it while I'm gone, which, let's be honest, he probably will.
We had a lovely and low-key Easter. Egg hunt that didn't degrade my faith in humanity. Lovely church service. Baskets with clearance aisle toys that the kids LOVED. The only snag was that the Easter Bunny hid gifts in my car (nosy kids!) and I had to rebuy the damn chocolate bunnies three times. 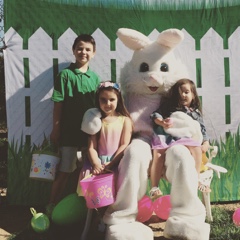 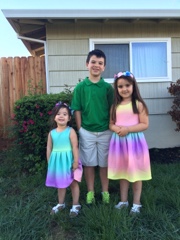 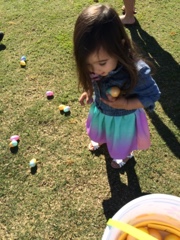 I'm completely over thinking my trip tomorrow (shocker!) and I keep buying shoes like the secret lies in stilettos. It doesn't, but I'm carefully kicking myself for not trying these shoes sooner.
Posted by Chiconky at 5:54 PM 1 comment:

Friday night we went to a "Legends of Hip Hop" concert with friends. We themed out, or at least some of us did. 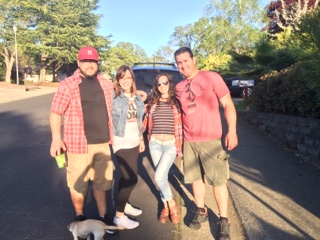 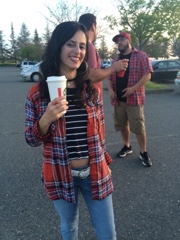 Drinking "coffee" before the show 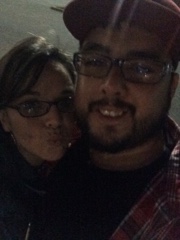 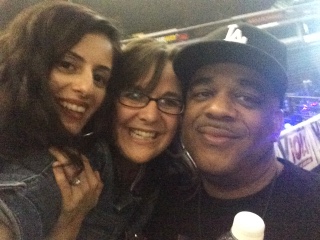 Stormed in for a selfie with Rob Base 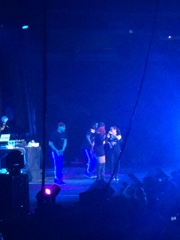 Salt N Pepa killed it!
Such a fun night! We danced for 5 hours and I got my highest step count ever. My thighs are still bruised from bumping into the armrests.
I've been in a bit of a funk the last week or so, but this definitely helped brighten things up a bit.
Posted by Chiconky at 9:41 PM No comments:

So we met with the social worker, and after Avery telling her we planned to keep the baby in a cage, then showing her the dog crate, I figured that the only way to go was up. That totally happened, BTW. To the social worker's credit, she handled it pretty well.


We started with the basic interview. What age range are you interested in? More than one? What are your reasons for doing this? Are you willing to accept babies with x, y, or z? Then she asked about reservations. And I just couldn't stop talking. Seriously. It was as if a flood gate had opened. There is so much extra involved in this, and I just couldn't say with 100% certainty that this was what was right for my family, that I was Sure. Neither could C. In our relationship, I'm the one who would push us out of the plane, but C would make sure we didn't die. He's my finisher. In this process, I've been the one with the diligence and we've both been putting one foot in front of the other, but neither of us has been what I'd call the driving force. And neither of us could say with any conviction that this was 100% the right call. On the other hand, I can say with 100% certainty that I have no interest in being pregnant again. Which basically left us at, "Are you both sure you're ready to do this? Are you both sure that this is what you want?" Two hours of that later, she left with the promise to call next week after we had a chance to talk some things through.


I love the IDEA of fostering a baby and hopefully adopting. I follow adoption blogs and Instagrams and fantasize about my own babies. Sometimes my arms ache for a teeny person and it seems as if I'm missing a duckling in my row. On the other hand though, I haven't made the herculean efforts to complete paperwork, lock up everything, adjust the house, get all the documents ready that is required to become certified. Honestly, I think that if I was truly committed I would have put more steam behind this. Instead, we've been slowly tripping along all the while flip flopping between "do we?" and "don't we?"


It's so hard for me to admit that I may have gotten us this far only to turn around. There are SO MANY babies out there who need someone to love them and take care of them. And we could do it. If someone dropped a baby on my doorstep, I'd be all over that and we'd do an amazing job. On the other hand, if someone didn't drop a baby on my doorstep we'd be okay too. That's the rub. With each baby thus far, we've known that someone was missing from our family. Is it fair to get into this, to the baby(babies), to C, to Eli, Sydney, and Avery, if we're not able to say it with conviction? I'm incredibly conflicted because we can do hard things, but if we say no, then I'm choosing to NOT do hard things and saying that we aren't going to be that safe, healthy home that some baby might need. But I'm also saying yes to sleep, and adventures that aren't feasible with babies, and time with the bigs, and maybe a more authentic idea of what my life is turning into.


I am so, so sad. I'm sad that I may be done with babies and that I lost the last few months of lasts assuming that we weren't done. We may be five, albeit an awesome five. Averson most likely won't get to be a big sister. I picture myself with a baby strapped to my chest in the Ergo and I'm elated, but that seems like a very simplistic and unrealistic reason to consider adopting a baby. I'm sad because there aren't a lot of prospects for baby nieces or nephews, so my chances of loving on babies anytime soon are pretty slim. It's just really, really sad.


I feel like I'm grieving the loss of the potential, while knowing that next week or tomorrow or tonight we may flop back and decide that this was all cold feet. But I am more certain of my sadness than I have been in anything else during this process so I'm thinking this may be the certainty that I was looking for and that really sucks.

We are very drought sensitive, so I am absolutely NOT going to complain about the downpour we've had for the last four days straight. What I am going to say though is this. These people are f-ing nuts and my house is just a teensy bit too small.

This week Eli is going to a 4 day science camp and neither of us could chaperon. I'm desperately wanting to pull his permission slip and make him stay home. At first, I was worried about him behaving himself for that long on his own, but now I'm worried because "MY BABY!!!!" I spent today actively not thinking about that. We've also got a social worker visit this week to talk about maybemaybenotohmygodarewecrazy foster/adopting a baby. Because we're insane. And still totally on the should we/should we not fence despite this step being much closer to the end than the beginning of the process. Ack. Also spent the day actively not thinking about that.

Because I can't drop that right there and bolt I'll leave you with one last fascinating tidbit. I'm also working this month to clean out our freezers and our pantries. The amount of food that I collect is ridiculous and every so often we need a good purge. A friend of mine is sharing her family's menu with me for next month and I'm super excited about it. She plans a full month in advance, and allegedly has her budget down to around $400 (family of 5). I love the predictability of that. C, of course, does not. I'm hoping though that we can bastardize it a bit to make it work for us.

Yep. I was totally manic. This last week I've been dragging ass and have only made it to the gym three times, including yesterday when the kids and I had to get out of the house or else. I will suffer through a lot of things, including the weight room mid-morning on a Saturday, for two hours of childcare.

I've got to get back on it because a super-amazing, generous friend is flying another friend and I out to Vegas at the end of the month for a girls' weekend. Both of my girlfriends are gorgeous in the "regularly mistaken for 21" way, so I've got to at least take a break from the cookies for a second. Plus we have family pictures in two weeks. So, yeah. Gym and vegetables.

Speaking of Vegas, I have no idea how to "do" that. The last time I went I was 21 and I went with C and my dad. Pretty sure I wore overalls. I was talking with my friends and realized that my "party" clothes consist of boyfriend jeans, skinny jeans, and now a super cute pair of flare jeans. I have an animal print work shirt if I'm feeling crazy. So I spent the morning on ThredUp looking for sequins and short and ridiculous. I think I may have succeeded... This whole social life, girlfriends thing is still a bit out of my comfort zone and there's a part of me that's desperate to cancel this trip but I'm trying to lean in. Talking with them last night, I realized that it's really important for my kids, especially my girls, to see us have these friendships and to be having fun. So really, I'm going to Vegas and wearing a teeny sparkly dress for the sake of my daughters. 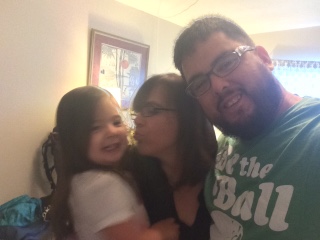 I took Avery's birthday off and it was basically the best day ever. 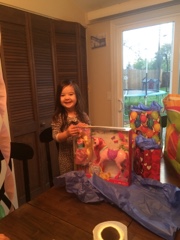 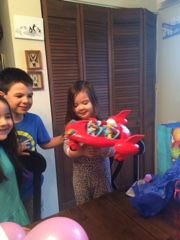 And her Rocket! She's been obsessed and these things are literally hundreds of dollars on amazon (BTW, WTF?). I found a slightly broken one on eBay for $45 and she was thrilled! 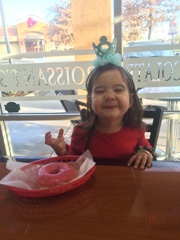 Birthday donuts. She went classic with the pink icing, no sprinkles. 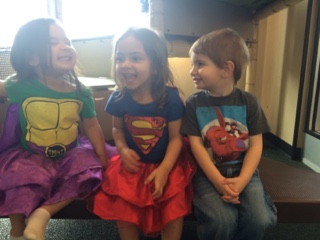 Lunch with her besties in matching superhero wear. I walked into the play area to break up a brawl and they turned and started alternately giggling and punching each other. 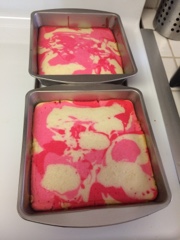 She picked out the Duff pink camo cake. I'm pretty proud of it, obviously. 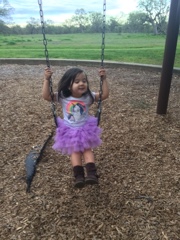 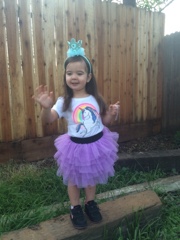 This girl. This girl is pure joy. She's hilarious and smart and thoughtful. She's basically all the awesome rolled into this crazy little whirlwind. I keep asking her when she got so big and she says, "When I jumped on the trampoline." Not sure how they correlate, but she's adamant. She's witty and independent. I snapped at her tonight as she tried to stir my boiling pasta. Without missing a beat she turned around and said, "Mom! I'll be fine. Calm down!" She's more imaginative than any of the other kids have been and I regularly catch her playing with her critters or her babies with running commentary and narrative. She makes up crazy stories and is so excited when she remembers a dream. She's mischievous and creative, which I'm sure I'll loathe when she's old enough to cause criminal damage but hopefully will continue to admire. She loves to "read" and will lay in her bed with her books hours after everyone's sleep.She is unapologetically assertive and will NOT be pushed around. She also will NOT be potty trained, but that's another story for another time.

Three. It's solidly not a baby. Like I cheesily wrote on Facebook, I love this kid and she's so fun, but I am sad to say goodbye to my sweet baby.