Here's a peek at what we've been up to. I've got a whole stash of half-written posts, but nothing ready to go yet. Stay tuned...

In the meantime, here's a whole bunch of the cutest pictures you've ever seen. 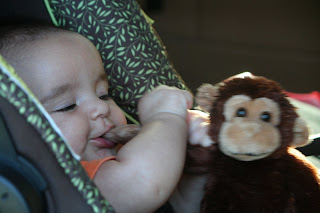 Syd's teething, so we're a major drool-fest around here. Also, she LOVES this monkey. 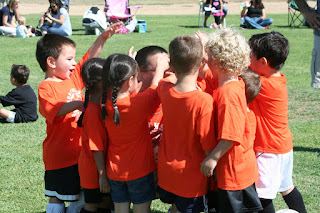 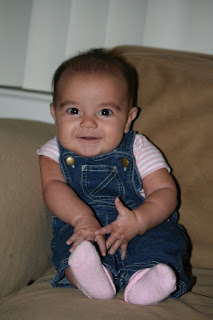 Syd turned four months old! That's a third of a year, which totally freaks me out. She's incredible and basically just a big ball of sunshine. Her smile starts at the top of her head and goes through her, clear to her toes. 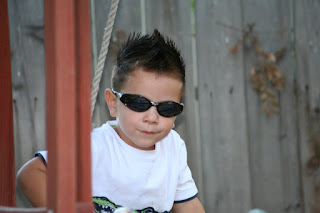 Look at this kid. This is the haircut he requested and waited patiently for. He's awesome. There's a little girl at school who thinks he's "cute," wants him to kiss her, and won't let him play with the other girls. We're in big trouble.

I'd be a grouch too

We're fixin' to start Syd on some baby food and so I was gathering up our "supplies." As I was pulling them out, I ran across a couple of bibs that were handed down to us from my sister, who got them from my mom from when we were babies. I especially like this one. 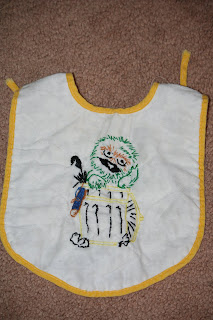 Awww! Hand embroidered by my mom. 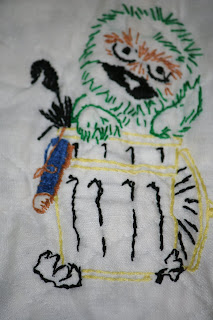 A close-up of her handiwork. Do you see where I'm going yet? 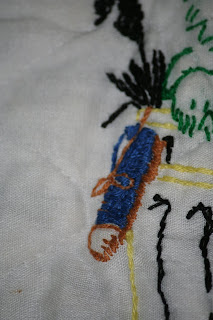 People, at this very moment every piece of clothing I'm wearing, including pants, was purchased, and worn, prior to getting pregnant. And I'm at least mimimally appropriately dressed. Eli, on the other hand is wearing a size 18month Hawaiian ensemble. 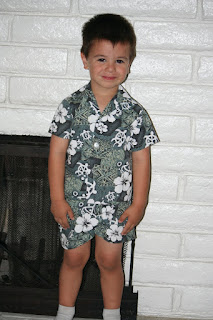 Things I didn't think about in grad school

Sometimes I catch myself doing something so out there that I wonder, if I could go back and describe my life to first year of grad school me, would I be thrilled or horrified? Today I talked to a lot of women about a lot of different things. For example...

I agreed to research the following: God's view on murder vs. killing, giant bunnies, Avatar's Native American inspiration, the Salvation Army (as a military installation), and how much land one needs to keep a giant bunny.

Statements I made: You look good without the beard. Air hug! How's the head squishing going? I guess I'm not wildlife. You can't call someone a potato nose. I don't know if Catholic Charities needs a bunny.

And that's just today. I've also been accused of shaving my head to look like an inmate, having an affair with three staff members, rolling my eyes to the devil, obstructing justice, and been called "the unit's Mom."

I love this job. At least once a day I think "What the fuck just happened?"
Posted by Chiconky at 9:28 PM 2 comments:

C works as a manager at a large home improvement store in town. Oftentimes he'll come home with stories about an obnoxious customer or a crazy order or some other work-related shenanigans. Last night he came home and was a little upset because a woman had returned a large order of blinds that she'd had for over a year and that had nothing wrong with them. This was going to hurt the store's budget, which screws up bonuses, quotas, etc. so he was a little "peeved." So why'd she return the blinds you ask?

Apparently this woman had paid for tiles to be installed in her house. The installer did it wrong, and then was "unhelpful" when that was pointed out. From how C told it, he tried to half-ass the repair and then told her where she could put her opinions on how she'd like her tile to look. So this woman returned the tile. And everything she'd bought at the store. Ever. She hired a flat bed, loaded it with cabinets, refrigerators, blinds, tiles, even a toilet that she pulled out of her bathroom, and returned. it. all. Point made.

I dream of being that determined to make my point. Can you imagine how pissed off she must have been to rip out her toilet and take it to the customer service desk?
Posted by Chiconky at 9:02 PM 2 comments:

Good for what ails ya 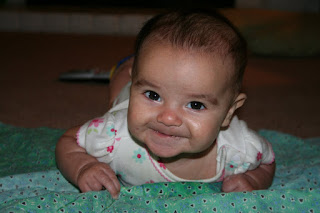 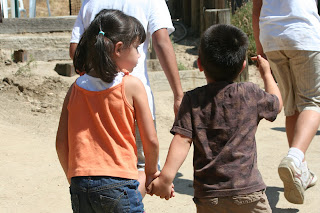 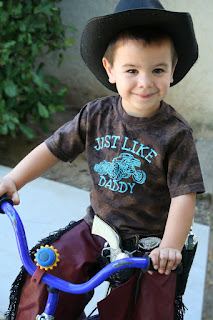 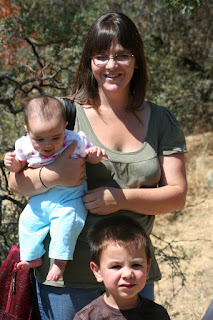 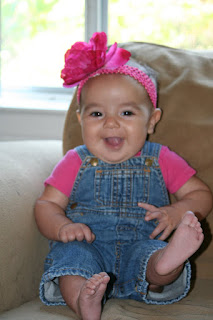 Giant pink flowers and baby overalls
Also good phone calls, fruit stands, comfort food, and Lost on Roku. Thank you to everyone who checked in on me. I'm feeling much better.

I woke up early, as usual. Got the kids ready, kissed the family, and set off for an easy Friday. I stopped to buy cookies for a potluck lunch. Even so, today was a hard day.

It's been a trying week. I've been disillusioned by the way people are treating each other. I've been frustrated by the inmates and their overall lack of motivation. I've been frustrated by my coworkers and their overall lack of motivation. I'm angry because sometimes it all seems so futile and I don't want to become jaded and cynical. I'm angry because of how people feel like they're entitled to treat other people like shit.

On top of all that, and likely a causal factor, is that I am tired. Capital T Tired. I wake up every night at 1:00, 2:00, 3:30, and then the alarm goes off at 4:00. I've been keeping up with the running, but with little progress to show for it. I got on the scale this morning to find I haven't lost any weight at all in the last week. So tired, AND frustrated.

So I get to work today, hoping for a typical Friday. Most people work 4 10 hour days so Fridays are very short staffed. Which means a very quiet office. Most weeks, except of course this one, I've finished most of my work so Friday can be dedicated to studying, hanging on the unit, and getting a headstart on the next week. But not this week. I started off behind, hoping to catch up today. I came into the office to find out that one of our long standing patients had attempted to kill herself the night before. This happens quite a lot, but usually is more of a gesture than an attempt (think scratching your arm with a piece of plastic vs. slitting your wrists). This time though it was a serious attempt and she likely would have died if she hadn't been found. While I and a couple coworkers were talking about the suicide attempt, we got a call that there'd been an attack on the unit. We had a conversation about which inmates' crimes really got to us, and how I could work there with little kids at home. Later I found out one of my favoritite inmates had also tried to hurt herself.

Today was one of those days that reminds me that I don't work "in the real world." I know a lot of murderers. I even like quite a few of them. I carry an alarm, a whistle, and a huge key ring through doors that have to be remotely opened for me. People regularly flood their cells, smear poop, and cut themselves open. Yesterday I took brooms off the unit because a woman keeps threatening people with them.

Because of all these things, I find it hard to relate to people sometimes. I pick up my kids from daycare and look at the other moms, in their workout clothes, cute sandals, "business casual." I think, "I spent three hours with a woman who stabbed her boyfriend, I worked my ass off to get someone to take a shower, I watched a woman fight an endless battle against unseen demons, I listened to a woman who killed her kids talk about what a great mother she is. How 'bout you?" We ask how each other's day was and I give the standard "Great!" or if I can't muster up the enthusiasm "Busy!" Today I couldn't even do that. Today I was sad. Just plain sad.

In psychology we talk about "self-care" and "burnout." It's especially important when you're doing psychology in prisons. Luckily I recognized it before it got too bad. I needed to come home, veg out, sleep in tomorrow. I'm getting Syd's picture taken, hanging out with Eli, maybe going to the beach. And I'm going to recharge my batteries so that Tuesday I can go back and start again. Because I love my job. Today was hard, this week was hard, but I love my job.
Posted by Chiconky at 8:33 PM 3 comments: