I just cleaned up my blogroll and realized how many of my favorite blogs have faded quietly into the night. I need some new blogs to stalk! What are your favorites?
Posted by Chiconky at 7:35 PM 2 comments:

I'm all stressed out about work so I remoted in tonight in order to continue playing audit-jockey and try to make up, literally, .006 of a percentage point. This is my super exciting life right now. We were joking during committee that people always want to know what it's like to work at a prison. I have two types of stories. Those involving bodily fluids (that no one really wants to hear) and those involving .00? of a percentage point.

In other news, I think I may be manic because I'm brimming over with energy and GREAT IDEAS! Some are actually great ideas, and some may turn out to be spectacularly bad ideas.

Great idea #1. I started a Shutterfly book and my plan is to do a page a month. That way, next January I can buy a totally complete book of our whole year and the pages were made when I actually remembered what happened and where I saved the damn pictures! I was inspired while I was trying (unsuccessfully) to finish Averson's baby book before her 3rd birthday.

Great idea #2. I'm starting a new Girl Scout troop. I haven't been thrilled with Syd's troop and it meets at really inconvenient times (who plans meetings for 5 year olds from 6-8 on a school night?) I probably should have just pulled her out but I'm stubborn AND I can't keep my mouth shut. So here I go. Because I didn't have enough going on.

Speaking of Girl Scouts. I have eaten SO MANY COOKIES. It's disgusting, really. And yet, I continue.

We finally saw The Good Dinosaur and I'm super weirded out by it. WTF with the cult-y pterodactyls? And the fermented fruit?

I'm finally drinking the kool-aid and looking for a sectional. We have a little, 1950s style living room but I'm tired of sitting in a pile. My kids all smell kind of bad and I need my personal space. I'm soaking up recommendations everywhere I go and it's gotten a little obnoxious.

I never got our family pictures taken for Christmas cards and had planned to get some taken in February or March. But now I've gotten my Dora haircut and I'm eating all the cookies. So, fat and memorialized or no?

Averson turns THREE in two weeks. She's still not potty trained but she does put herself to bed and insists on quietly looking at books instead of cuddling. She's obsessed with Little Einsteins and I scored a toy Rocket on eBay for not-a-million dollars. She's going to be THRILLED. I think we're going to do a day trip to Oakland for the zoo and I bought her a purple tutu. It's going to be awesome.

We're trying to plan a family vacation, either for spring break or early summer. I'm really tempted to do LEGOLAND or Universal Studios, but I'm also wondering if it might be cool to actually use E's National Park pass before it expires. Any cool parks to recommend?

Yep. That's it. Lots of random and lots of energy. Last Friday I slept for 10.5 hours (thank you FitBit) and I'm guessing something similar will happen this week. I'm so weird and yet so predictable.
Posted by Chiconky at 9:55 PM No comments:

Ready for some football!

We played hooky and headed to Super Bowl City yesterday. My folks mentioned they were going and it occurred to me that it was a phenomenal idea. When else would we ever be this close and able to check out the craziness so easily? So the bigs and I took a "Mental Health Day." We spent all day downtown, most of it I spent either carrying Averson or with her strapped to my back (she was a bit mommy-clingy in the crowds). Seven miles according to my Fitbit. Still not sorry we left the stroller behind, but my poor muscles are super sore today. 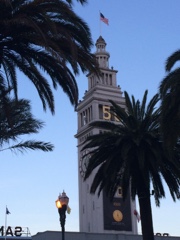 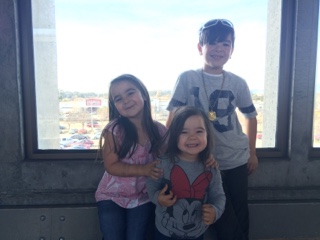 Their first BART experience. First time stepping over homeless people and circumventing ambiguous puddles too. They loved it! And they also loved hearing about all of our MAX adventures when Eli was a car-hating baby in Portland. 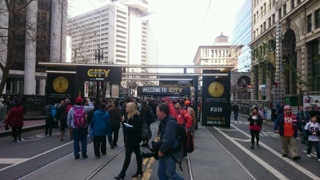 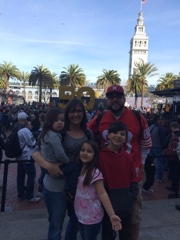 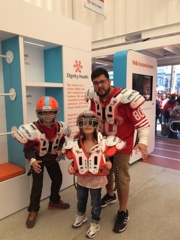 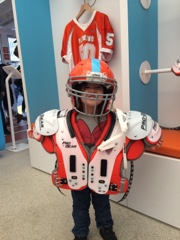 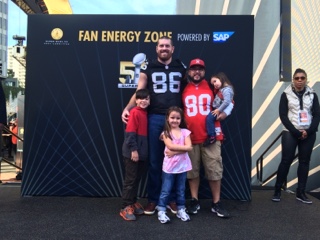 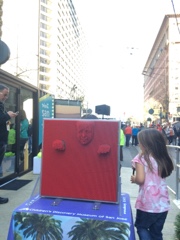 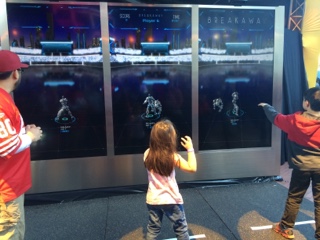 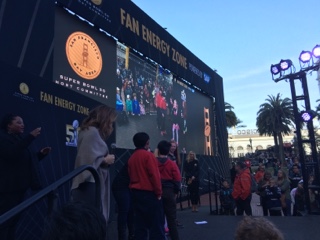 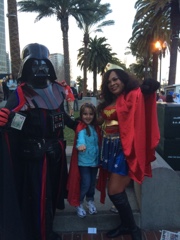 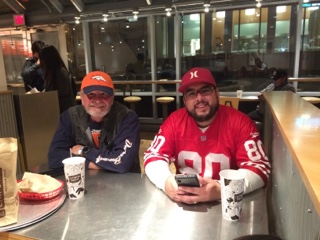 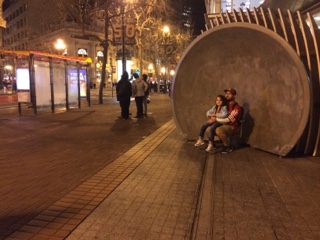 We headed back out finally at ten. Poor Syd crashed the fuck out on the train :) 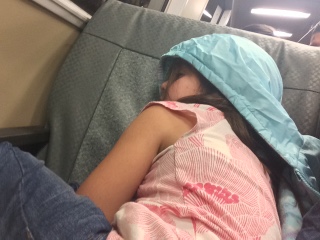 Party tomorrow, including a pepperoni covered, football shaped cheese ball I'm particularly proud of. And on Monday we eat kale.
Posted by Chiconky at 8:33 PM No comments: