One of my students (adult learners) has a daughter in Syd's class. We occasionally talk about the girls, and we're splitting some room parent duties. Tonight she tells me, casually and with an apologetic smile, that "You daughter is a mean girl." She went on to tell me that my daughter yells at the other kids, that they're terrified of her, and that no one plays with her. Apparently her daughter has a large group of friends and none of them want to play with Sydney because she's just that "terrifying."

1) WTF? In what universe are we as mothers allowed to flay other people's children like that? You may tell me in detail what a raging maniac your kid is. He may be a raging maniac. He may set my kid on fire. But I am not allowed to call him a raging maniac to your face. I thought this was explicitly written in the mom code.

2) You don't approach the professor after class to criticize her child, in front of other students. I was dumfounded and all I could do was give her the "WTF? look" and say, "Huh. I'll ask Syd about that. She hasn't mentioned that the kids are scared of her."

So now I've got some distance and all the hindsight comebacks (starting with "Let's not call my kid a 'mean girl'" and ending with "Why don't you send me an e-mail with your concerns and we can discuss it later if necessary." Fill in the middle with all the Mama Bear fueled expletives). But I can't avoid this woman because she's a student. And I can't tell her off, again because she's a student. So what the hell?

FWIW, I did talk to Syd because I freaked out and started crying in the car thinking that she was either being unkind to her classmates or being totally shunned and mean-girl-ed. She said that a lot of the girls tell her they don't like her and don't want to be her friend, but then said she didn't want to talk about it because she would cry. This girl does wear her heart on her sleeve so I'm not too worried about the over-emotional part, but GAH! She's been in kindergarten all of a month. I'd hoped to avoid this drama a little longer. C assures me that there are kids who talk to her and she's been invited on a couple playdates, so I can't picture her as the monster of Room A, but seriously. WTF?

I haven't blogged much because we really feel like we're just trucking along, and we're really busy. But then you stop and nothing seems particularly "blog-worthy." So brace yourself for a (hopefully not too) tedious catch up post.  C is coaching both Eli and Sydney's soccer teams, so three times a week it's all soccer all the time. I haven't totally committed to my role as soccer mom though, so I haven't bought the collapsible wagon. Eli's team is getting stomped and Syd's team is adorably chaotic. It's an emotional roller coaster every weekend. 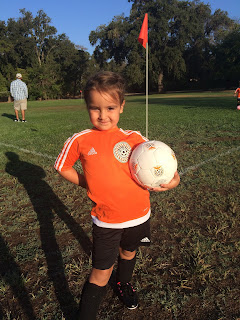 My grand plan of living on Ramen for a month turned out, surprisingly, to be a terrible idea. I swear there's been a different fundraiser every. single. fucking. week this month. Z books! Jog-a-thon! Girl Scout Nut Sale (did anyone even know this was a thing? And do you want some nuts?)! Jamba Juice! Just send in money and we'll tell you why later! This is why they say kids are expensive. Disregard the food, medical expenses, college funds. It's all about the f-ing Z books. So now I have five on my kitchen counter because they're also not allowed to go door-to-door, so the only people who purchased them live out of state. SMH.

BUT, there will be a fence very, very soon. At this moment I am soaking our fence line in preparation for pilot holes. My "down with brown" soul is dying a little bit but I will not miss the spectator show in the back yard at all. My crispy dead tree will be gone next week. Now if I can just build a huge fence in the front yard to block out my view of the neighbor's crosses in the front yard, I'll be all set!

It's the end of September and we're STILL having triple digit days. It's putting a huge kink in my love of fall. I bought two new pairs of corduroys and they're just sadly staring at me from my closet, while my capris are like a terrible drug. I want to stop, but I just can't. Because it's a million, million degrees. I am so sick of my short sleeved shirts and shorts and sandals. I've basically stopped cooking because I can't handle a single day more of BLTs or tacos, so we're all eating like six year olds. I need soup! Chili haunts my dreams! My crock pot is calling to me!

In true Chiconky-fashion, I "accidentally" over extended myself and headed up a huge event at work, then volunteered to represent Mental Health in another huge training three days later. Our event was yesterday and is now blessedly over for the next year. I think I walked about 10 miles yesterday with a clipboard tucked under my arm and a radio clipped to my collar. It went well, aside from my yelling at an officer for f-ing up the raffle system and having to admit that I can't ever tell the warden from another person. Nice to look like an emotional moron every once in a while. Eli stayed after to help us clean up and got a shit ton of leftovers thrown at him. So now we have a three foot tall, filled Elmo piñata and a long board.  ﻿

I've been about 80% in going to the gym every morning. I sleep in my gym clothes, and then when my alarm goes off at 4:00 I have to decide whether I'm willing to "waste" the clothes or just get my happy ass out of bed. Most times I manage to get there, and I'm usually one of the first five. Gyms are quite lovely that early, by the way. I can lift without feeling stupid around the "real" weight lifters, and I can always get my favorite machines. I have a half-marathon in two weeks that I'm woefully under-prepared for, but I'm hoping that the weights and the cardio I have been doing will get me through it. Survival mode here. I think once this one's over, I'm done with races for a bit. I'm burned out on training and want to just start exercising to feel good. I also really want a FitBit, but I haven't decided if I want one because they're cool, or because everyone has one. I'd love opinions if you've got one. I can see myself getting really obsessed and pulling a Mandel.
﻿
﻿
Posted by Chiconky at 9:49 AM No comments:

Just to be clear 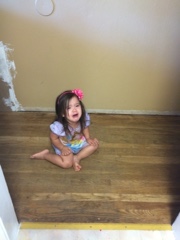 This one was in time-out adorably screaming at me, when she added in, "I'm so mad at you! And my sister's mad at you too!"
Syd pipes in from the other room in a perky voice, "Actually, I'm not mad at you at all." Shut her sister down efficiently. Poor Avery got left all on her own, apologized, and put the damn Tupperware away.
Posted by Chiconky at 6:11 PM 1 comment: