OMG. Last Friday feels like a lifetime ago. But I'm really trying to be better about writing regularly, and the further I get behind, the harder it is to catch up.

The long weekend started on Friday afternoon as I loaded up our Girl Scout troop to spend the night at the zoo. It was as awesome and as awful as you'd imagine (in hindsight, it really was amazing though.) The girls ranged in age from 5-9. We got to the zoo after dinner and set to work setting up the enormous tent I found in our camping gear, but failed to check to see if there were instructions. Luckily between the three adults, we figured it out! Then we were allowed to wander the zoo as the sun set. It was SO COOL but I was a little sorry that I read Fierce Kingdom. We got to see a lot of animals that either aren't out during the day, or are out and super boring. Red pandas, BTW, are adorable when they're moving around. We also got to see fornicating turtles, apologies to anyone whose daughter came home talking about the Great Wrestling Lake Turtle. That's not a real thing. I panicked and the girls were too short to see the sign I pretended to read. One girl asked if she could sleep outside, so she and I hijacked the rainflap of the tent to sleep under the stars, lulled to sleep by the sweet din of the flamingos and the occasional lion's roar.

The next day, after we got home from camping, Syd and Averson had to hustle to get ready for a Mad Hatter Tea Party. I excused myself from attending because honestly, I was not in a kind or friendly mood. Luckily my friend lives next door so I snuck over to her house to bitch about my life for a minute. I heart friends who will let you sit at their kitchen counter and be petulant about your life.

Sunday our friends had a barbecue to introduce their new neighbors. I made the most amazing Mexican Street Corn Pasta Salad, so amazing that I documented the process on my Instastory which required me to learn how to do Instastory. So of course, C gave it to Sydney to carry in and she dropped it all over the driveway of my friend's house. Nothing says, "Thanks for the invite!" like covering your friend's concrete with mayonnaise coated pasta.  I salvaged half the bowl and totally insisted on eating it. I also made S'mores bars, which are amazing and I always forget about them when I'm in the mood to make cookies. I ran out of chocolate chips so I added a crushed up Milk Chocolate with Sea Salt bar that I had and it was a wise choice. Gee, I don't know why Weight Watchers isn't working for me? 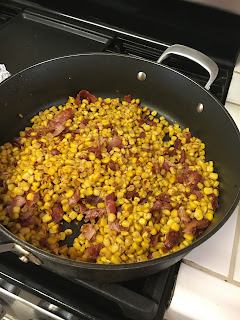 We left the party at a responsible hour since we knew we were getting up at 4:30 so that all THREE of our scouts (Averson became a Daisy last week too) could go to the local cemetery to erect flags. We started doing this with Eli a few years ago and have added in the girls as they became scouts. Its seriously one of my favorite community things that we do, and that's saying a lot considering that it's at 5:00am, often cold, and full of kids that aren't mine. I find it to be a really great way to impress on the kids what the day is about, and they get to work as a team to make this huge impact on our little town. Each of the flags is donated by a family and many were actually laid on the caskets of veterans and fallen soldiers. I was looking for a name to point out to my two Girl Scouts, and as luck would have it the only one that was labeled belonged to a female veteran. Ms. Edna Taft, thank you for your service. 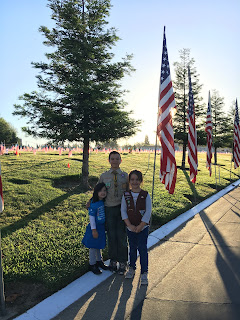 We followed that with breakfast out with our friends, a nap, and then we spent the afternoon as guests at a super ritzy club pool. There are no pictures because I was too busy enjoying the water slide and the alcoholic sparkling waters I recently discovered (but not at the same time).

And because I'm already late, I'm going to include Tuesday too, which was otherwise unremarkable except that it was the opening performance of Eli's class play, Aladdin, in which he had the lead! He did an amazing job and it was so cool to see him up there. I was more than a little concerned after he told me that he had 22 pages of dialogue to memorize, but he totally did it, and even helped some of the other kids with their lines. Maybe he'll join the drama club in middle school (which is next. year. OMG.) 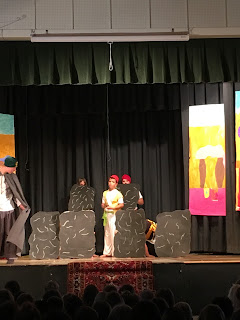 Posted by Chiconky at 5:25 PM No comments:

I started writing for this awesome group dedicated to helping moms and parents connect. You guys know how I love my village, so my first article is all about the friends you need to keep you sane. Check it out here
Posted by Chiconky at 12:04 PM No comments:

Averson's last day of preschool was on Friday, and it was about the cutest thing ever. This one loves school so much. She is really pissed that summer is so long because she can't wait to start kindergarten. I finally got her to calm down when I promised her that I'd try to teach her to read over the summer so that she can hit the ground running in August. 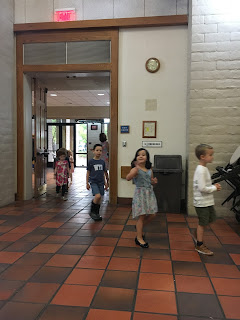 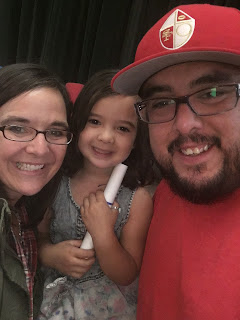 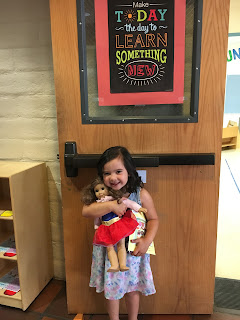 I thought I'd be sad to see her graduate. I kept telling myself, "This is my very last preschool graduation!" trying to will the sentimentality to the surface. But really, I'm in a place where I'm loving the ease of having bigger kids. Averson learned to tie her shoes last week (in about three seconds). Next year, all three of my kids will be in school full-time. I have loved this preschool and I adore the teachers, but I wasn't sobbing on our way out.
Posted by Chiconky at 3:43 PM No comments:

Really making a name for myself


One of my office mates is that person who has several personal calls, loudly, in the shared office area. I've been live-tweeting the on-going saga of her life to C, so I'm inappropriately familiar with the stomach bug that's been making the rounds of her house. This is important because on Friday I noticed that someone had left a bottle of "Poopouri" in the bathroom stall. I thought, "Wow. She totally doesn't mind everyone here overhearing all her personal business, but at least she's conscientious about the bathroom!"  My first thought was that I needed to tell C. Even better, I could send him a picture, since I can have my phone with me now in my non-prisony office! So after I was done with what I was doing, I snapped a picture of the bottle resting daintily on the toilet seat cover dispenser. BUT, I didn't have my phone on silent, which would typically be NBD except I came out only to see another co-worker in the bathroom looking at me quizzically. It took about a millionth of a second to realize that I just got busted taking a picture in the bathroom stall. And there's no way that trying to explain was going to make it any better. My only option was to avoid eye contact and run out as fast as possible. 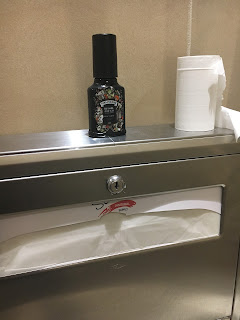 So now I'm the new girl in the office who takes her phone into the bathroom with her. And who takes pictures of her toilet business. And doesn't wash her hands. If you need me, I'll be hiding under my desk...
Posted by Chiconky at 9:03 PM No comments:


I have a whole post marinating in my head about how grief has turned me into a evil monster, and another one about how half-assedly I'm committed to not weighing 500 pounds (I tried intermittent fasting! And there are two bags of chocolate in my nightstand!) But both of those feel like they'll require more energy than I have right now, between work and grading and not selling any of my children or dogs. So instead, a random sample of life.
I have been full-fledged Dance-Mom-ing Syd and her friend, who decided to do a hula hoop routine in their talent show. Then I realized that they couldn't hula hoop. SMH. But, after some tense rehearsals and several creative choreography edits, they had a pretty solid routine. They performed today and did great! Also, I super over-anxioused it, as evidenced by the other acts that were designed and performed by seven year olds. 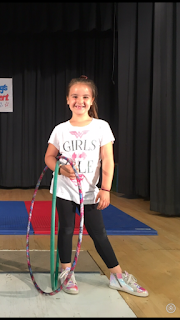 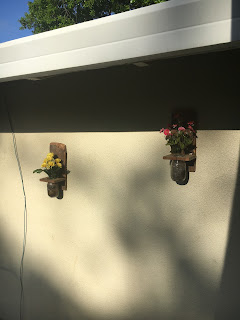 I've had these two cute planters on this wall forever, and the plants in them were not doing so hot (read: I forgot about them but they hadn't quite died all the way.) My cousin sent out a picture of her porch, which had fake flowers in honor of my grandmother, who loved all things plastic. I jumped on the bandwagon and I kind of love it a lot. C said it was especially great how I left the old crappy, moldy dirt in there for realism. 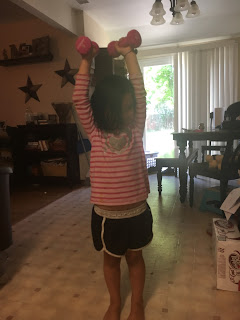 Averson is kind of obsessed with my Orangetheory, so I'm working on her form. Never too young for a solid shoulder press!

And in "My kid might be a sociopath" news... 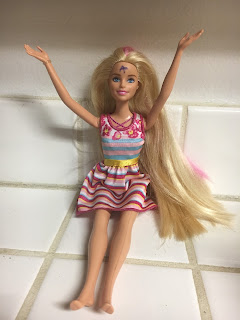 This is Averson's favorite Barbie. "She's happiest when she has both of her arms up like this." I keep finding her in weird spots. And I just realized that we got her right about the same time that Manson died...

We're planting real flowers too! I'm going for an urban farm vibe, so we added a lemon tree and a blueberry shrub ($15 at Costco!), plus some ridiculously colorful daisies. Eli said that it smells like a greenhouse when he walks out the door. Just the way I like it... 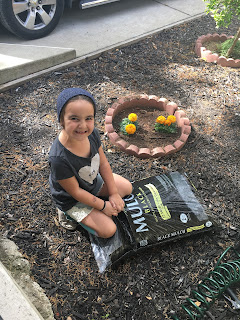 We're late to the show, but the kids and I have started watching the Netflix version of A Series of Unfortunate Events. OMG. It's SO GOOD. Like, good enough that I look forward to watching it with them and even C is watching it now. And bonus, I've convinced the girls that I'm "allowing" them to play with my hair during the show. #winning.

We're headed to LA next week to visit my brother and we're taking the kids to Universal Studios. We realized though that maybe they hadn't actually seen Harry Potter, one of the main reasons we chose Universal over Disney this time. So tonight we're going to binge on at least the first two. I REALLY hope they like it!

OMG. I just got this text message from C and almost screamed out loud. If this were a horror movie, she'd be creeping up my ankle right now. 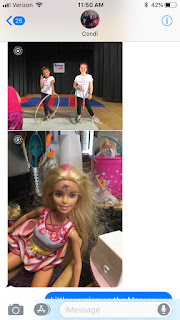 Posted by Chiconky at 2:04 PM No comments: