So about those resolutions...

Last year I made two respectable resolutions. The first was to get all of my photos into albums before the new baby came. Not so much. What I did accomplish was weeding out 8 million pictures from my "artsy" phase of flowers, zoo animals, and old barrels. Note to self: Never, ever, ever take another picture of an animal at a zoo. No one cares. I also tried to organize the 10,000 or so pictures from Eli's first year, gave up, and reprinted them. Uber helpful. So now I have a nice, neat Shutterfly envelope of pictures waiting to be put in an album, a box full of pictures waiting to be put in an album, and poor Syd. None of her pictures have been printed because I haven't even bought her album. So Resolution #1? FAIL.

Resolution #2 was to deal with The Crazy. This one went much, much better. The Crazy is what happens when I get too stressed out. I think about it like this. Most people have an "issue." This could be their kid's safety, their weight, how clean the house is, car repairs, whatever. Mine's money (I know, I know). So the point of the issue is to have a place to focus your attention when your life gets too stressful. Rather than think about, worry about, or deal with the actual stressors, I focus on our bank account. It has at times gotten so bad that I'm compulsively balancing our accounts in my head 24/7. I wake up thinking about what checks have cleared and what bills are due. I check our accounts on-line many, many, many times a day and have near panic attacks every time. Then, in order to keep my "issue," I'll go shopping and spend money we don't have. It's a vicious cycle.

There's no reason for me to freak out so much, but it's my "issue" and it keeps me from having to worry about the real problems. This resolution went much better. I still feel the urge to focus on money when life gets crazy, but I know what I'm doing and I can usually keep it in check. My debit card got hacked and our account was cleared out right before Thanksgiving and I was remarkably calm about it. I don't do the tight fist, tight fist, shopaholic cycle anymore. I've become a lot more egalitarian with C and our shared money. And I feel like I've done a much better job of identifying the true issue and dealing with it, rather than burying my head in our bank account. So Resolution #2? TOTAL WIN.

I am so excited for 2011. Possibly more excited than I've ever been going into a new year. I just got licensed. C and I have a solid plan for getting ready to get ready to think about buying a house. C's got awesome plans for the next year, and we're finally in a position where they're feasible. The kids are amazing, and will both be super cool ages this year (Syd'll be 1, Eli'll be 5). It's just going to be awesome. So I'm not making resolutions. There are things I want to do. Pay down/off credit cards. Lose weight. Be healthier. Get those damn pictures in an album. Be a better mom and wife. But mostly, I just want to remember what an awesome time in our lives this is, slow down, and enjoy it. 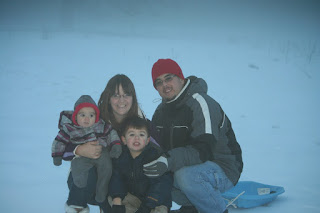 And maybe get a family picture with all of us smiling at the same time.

Email ThisBlogThis!Share to TwitterShare to FacebookShare to Pinterest
Labels: shrinking, The Crazy

Oh my word, YES on the zoo animals. Seriously.

Nice job with the money. I know what you mean about the tight fist/ shopaholic cycle. Hate it, but right now, I need to change to an alltight fist all the time sort of thing. Lame, but maybe it can allow for a more moderate shopping cycle soon.

I almost spit out my coffee laughing at the line "Note to self: Never, ever, ever take another picture of an animal at a zoo." ha ha ha, so true!

Sounds like 2011 is gonna treat you guys well. Congrats on getting your license, that will make a huge difference! :)