I got nuthin' (now with gratuitous kid pictures!)

I have all these posts floating around in my head, but none have really materialized. I could talk about how "Bulk Pick-up Day" sent me into an existential and moral crisis, complete with self-rightousness and empty promises to change how we live. I could talk about how I've been wearing the same three outfits to work because I won't bring myself to buy more clothes in the very large size that currently fits over my giant ass. I could talk about how I've started an exercise program and gained weight, which is actually the opposite of motivating, especially when said exercise program requires one to wake up, and sweat, at 4:oo am. I could talk about our camping trip, which we excitedly planned at the very last minute. I rushed home from work, C shopped and packed the car, we loaded everyone up, drove around the block, and gave up. Came home and rented a movie instead. I could talk about how pumping's going, including having my boss stand outside my door asking my very shy male co-worker "But what is she DOING in there?! Why does she have this sign up? Well, if she's breastfeeding that's one thing, but what is she doing?" I could talk about how Syd has decided this whole sleep-with-Mama- boob-in-mouth thing is for the birds. However, sleeping-alone-no-boob for longer than 20 minutes is also unacceptable. I could talk about how C is kicking ass at the stay-home dad gig, but part-time daycare costs almost as much as full-time, but part-time work doesn't pay as much as full-time work. I could write about all of that, but really? Life is pretty good. I'm happy. Work is good. The kids are fabulous. C rocks. Yesterday in the car I realized I was smiling for no reason. Just smiling. Syd was sleeping and Eli was in the back singing Buffalo Soldier ("Buffalo Soldja, Dressed like a race car. Buffalo Soldja, in the hawt of Amewica" even better because he doesn't talk like that), and life was good. 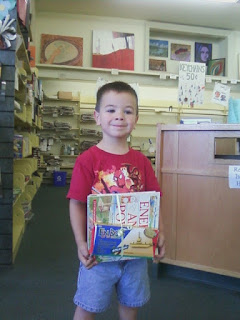 He won a raffle! He was much more excited than this picture suggests. 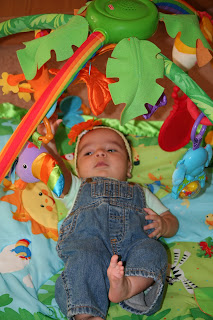 Baby in overalls. Is there anything cuter?

I love that she has her flower bow on her head with her uber cute overalls. I wish you would entertain me with talking about all those things :-)
The health nut it me is really curious about your exercise routine. With the pumping/feeding plus a cardio you shouldn't be gaining weight. Um, I am going to FB you a message.

What with moving I just caught up on your blog. LOVE the prison stories!!! Did I mention that my Minnesota co-workers all pumped in the bathroom to avoid the chaos? Not the best mood but it did have a lock on the door and nobody wondered what was happening in there. Just sayin'.

The fact that you manage to get up and get dressed to go to work is a feat in and of itself! You are doing a great job!!