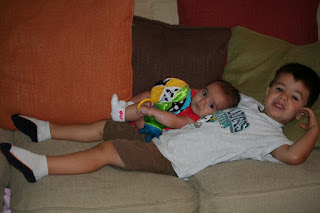 I've been around. Really! The thing is though that my computer bit the dust and I really can't bring myself to write posts at work. I want to, but the frantic "Close close close!" I was chanting in my head everytime someone walked down the hall suggested I should just give it a break. The computer is still limping along, but the power cord, which has been duct taped within an inch of it's life has revolted. I'm waiting for the new one to arrive as I type at the most awkward angle possible. (FYI, when your power cord breaks look on Amazon BEFORE calling a big box store. $3 vs. $120. Seriously)

I have a ton of pictures to share once I'm able to load them up on the Great Redneck Laptop. We've got costumes! Super cute, but totally store bought, TV tie-in, I die a little inside and then smack around old "Oh, we're not going to let our kids watch TV, no licensed stuff, NO PLASTIC" clueless me. I'm still trying to study, or more successfully trying not to study, for the licensing exams. Slowly but surely. We went to the fair and it was super fun. There were cows and cotton candy. Doesn't get much better. I'm also mentally writing a post on being one of only a few working moms surrounded by working dads.

Syd has her first bug and is totally miserable. I picked her up yesterday and in the lobby, exchanging fun small talk with the directors, she completely and impressively projectile vomited all over the room. Seriously. You wouldn't get better coverage with a five gallon bucket. She hit everything in a five foot radius. And it just kept coming. Poor booger was truly green. I've never seen anyone that color. She seems to be doing a little better, but we're taking it easy today. Thank goodness for all those banked furlough days.

Hopefully that cord comes today. In the meantime, I'm thinking that the universe is not very subtle and maybe I've been spending a little too much screen time. I've been off the computer for three days, and lo and behold, Facebook was still there!
Posted by Chiconky at 11:48 AM

Love the picture. So sorry Sydney is sick but lucky you're able to stay home and snuggle her back to health. I can picture projectile vomiting in the lobby. Who cleaned it up? I would be torn between ushering you out the door or handing you the bucket and taking my chances holding your locked and loaded baby.
Corey, Corey, Corey . . . you always underestimate yourself - you will cram like crazy at the last minute and ace the licensing exam.
Wish I could have been at the fair with you. There are lots of things better than cotten candy - corn dogs, for one. Remember the Minnesota fair? Deep fried feeding frenzy.
It's raining and there is snow on the mountains. I'm over my hunting camp longing.
Love to you all.
My love to you all.