I love the zoo 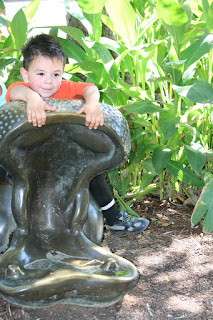 In every town we've lived in, we make it a point to buy a membership to the zoo. In years past, it meant that no matter how broke we got, we always had something to do. Now, it means we can take the kids as much as we want to and support our community. This weekend our local zoo hosted an event for kid-friendly vendors. They also advertised that Spiderman would be there. Knowing how much Eli loves Spiderman, I made plans to skip naps and take him for memory-making moments. I told Eli that there'd be face painters, but kept Spidey a surprise, just in case.
So we made it to the zoo and the girl at the ticket booth broke the surprise. Eli was ecstatic and nearly broke a run to try and find his hero. We made it to Spiderman's booth, where, miracle of miracles, there was NO line. Seriously. And so, of course, Eli flat out refused to go in. I managed to talk him into peeking around the corner to see Spiderman, but there was no way in hell he was taking his picture with him or even entering into a ten foot radius. So we left. He still says Spiderman was his favorite part, so not a total loss. 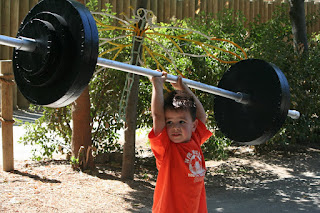 Once the Spiderman excitement was gone, we took off in search of the advertised Free! Face! Painting! Which ended up being a 14 year old girl at the karate school booth, but whatever. Eli got a skateboard that looked like a moldy jelly bean and he was thrilled. So thrilled in fact that he hugged me and promptly smeared it all over my shirt. Luckily we were still close, so he got back in line to ask the girl to try to salvage it. While in line he started whimpering, turned to me and said, "I hope they don't call the cops!" I asked why, and he said, "Because she'll know that I already had my face painted!" WTF, kid? And yes, every parent around heard my kid worry that someone would "call the cops."

Face painted and Spiderman avoided, we were free to enjoy the rest of the zoo and the melting pot that is zoo enthusiasts. I had Syd in the sling (because she hates the stroller, of course) and lots of people had commented on it around the zoo. "What a cute baby!" "What a cool sling!" "Oh, how sweet!" The usual. (I'm so humble, right?) The best one though by far was the lady in the background here 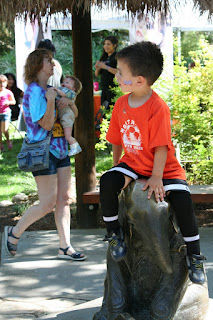 She walked right up to me and said "Oh! Yours is real!" I replied, "Ha ha! Yep!" but in my head I thought, "What a fucked up thing to say," until I realized, hers WASN'T. This chick walked all over the zoo carrying this freakishly realistic doll, totally acting like it was a real baby. Oh. My. God. I took this picture partly because really, how could I not blog it? and partly in case some kid came up missing that day, because normal people don't do this shit.
Posted by Chiconky at 8:20 PM

That doll really is freakishly real! Very weird and rather creepy. Once when L was a newborn and I was using the sling you got us a man said to me after she made a little peep "WOW, that is a real baby. I thought you were just caring a doll around in that." So baby there is a strange fake baby movement we don't know about.

What a great day - and what a weirdo to be walking around with a fake baby. Spidey, like Santa, is sometimes best left to your imagination. Glad the cops weren't called for Eli's facepainting violation.

Sounds like fun! And yes, that lady makes her way all over town. She sits right by the pavilion for the entire duration of the Fresno fair (which by the way is a blast, you should definitely plan on doing that too!)