So yeah. The test. We're not talking about it yet. In other news, the kids are good. Syd's sick, poor little booger. She's so congested that when I come at her with the booger sucker she kicks her little legs in excitement like "Yay! Breathing! Breathing's awesome!" I think she gave it to me too, but I'm not handling it nearly as well. I yelled at an inmate (though she totally deserved it), stomped my feet at work (super mature, right?), and walked in the house, put the kids down, and checked out. Literally, "Mama needs a break, Go play" checked out.

We spent the long weekend on the coast with my dad and had an awesome time. In three days we saw dolphins, sea lions, and seals, all unexpected and totally cool. We slept in a king size bed, which may the greatest thing ever. I love co-sleeping and I really loved having us all in the same room (byproduct of motherhood-induced fear of all things spooky/spending too much time with the "bad guys") and I really really really loved not getting squished out of the bed when Eli decided to join us. Though a new bed's not in the budget, we're seriously considering turning our bed sideways. C's even willing to bend his legs or sleep with his toes hanging off. It was that awesome. Would that be weird to ghetto rig some kind of giant day bed? Know what else is awesome? Saying "Go see what Coach is doing" when your son wakes you up at 5:30.
Yeah, so not a lot to say. I'll write more soon, and I swear I've got good stories. I just can't think of them right now in my congested, tired, hungry haze. So here's some pictures... 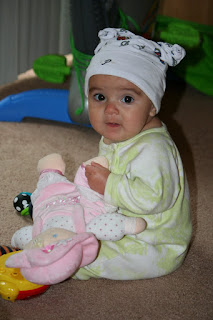 This hat makes me so happy. I love it 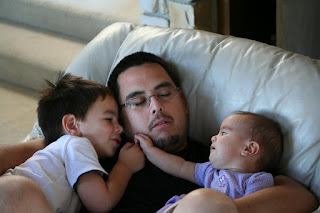 Doesn't get much better than this

You handle sickness like I do. Not my best self comes out with the snot faucet.
What beach town were you in? Till I was in college my aunt had a beach house in Santa Cruz (a block to the beach) and our family had free reign of it. In fact no one else,including my aunt, used the house. As a result I nearly grew up in Santa Cruz and keep telling Joe we need to move there. I am denial about the cost of living.
I am guessing you are probably a really stellar test taker. And nothing beats that last minute study high/rush so I am sure you will do great. You can celebrate by buying that king size bed. Till then do the daybed thing. Seriously, it isn't like guest ever really go in your room. I may not be the one to listen to on this though, our room is the saddest room in our house.

BTW I can't keep looking at that picture of Syd-so CUTE!

Glad you had fun! And yes... we LOVE our king bed!! And mind you, it's not a California King but a Western King so it is EVEN wider!!