I feel like you've gotten the short end of the stick this year, what with the new baby and your new penchant for whining and all. In the midst of the chaos, I sometimes forget to remind you of what an awesome kid you are. In the last six months or so you have become this boy. Not a toddler, barely a little kid, not even a preschooler anymore. More and more often I look at you and for a brief moment I can see with crazy clarity the 12 year old, 18 year old, 25 year old that you will become. It's exciting and heart breaking at the same time.

You are so funny, and you delight in making your dad and me laugh. A lot of the time it's poop and penis jokes, which I'll admit are pretty damn funny (it's my job to tell you otherwise. I'll explain when you're older). Then you tell the same joke over and over and over and over and over, until we have to explain why we're not laughing anymore. But you're learning. And your timing is impeccable. You've been known to tell complete strangers "My name is Eli. I was born in Oregon in a covered wagon" with a totally straight face, which has then led to some very interesting reactions. You have a special skill for physical comedy. One great example is that during Thanksgiving dinner, I was laughing with a friend about my reaction to a client who literally jumped out of her clothes. I heard your signature mischevious giggles from the other room and looked over just in time to see you streaking, butt naked, through the kitchen. I often have to ask you to take underwear off of your head. They're classics for a reason, kid.

You've always been curious, but lately you've outgrown my cursory explanations and I'm stumped so often that you've started asking your question and then immediately saying "We should look that up." Because of you I know what makes a rattlesnake rattle, that fish have ears, that the straps in boots are called "mule ears" and pretty much everything about the rodeo. Your vocabulary has grown so much that a lot of the time I don't know how to easily define the words you ask about. You're pretty sneaky when you're trying to swear ("fuckle" has been a recent point of discussion). And your memory is phenomenal. You've brought up things that happened years ago, and that no one's talked about since, like what we ate for dinner at a rest stop on the way to Minnesota. It's pretty amazing.

You are so creative and inventive. One of my favorite things to do is to catch you playing when you think no one's watching. Because you're such a performer, much of your time in other people's presence feels like a show you're putting on, but when you're alone I can see a whole different side of you. You love to play with your Lego men and to build houses and cars for them. You also love to create obstacle courses for yourself and call yourself "Ninja Warrior." You have a couple of little hidey holes in the house that you use, and I am so envious of the way that you can find a private, cozy spot in the middle of everything. You'll play behind the chair for so long that sometimes I forget you're there, until you pop up unexpectedly and yell "Boo!", scaring the shit out of me and making your baby sister laugh so hard she falls over. You love costumes and dressing up, but you're also very particular about it. You were rocking the cowboy get-ups HARD for awhile, but you outgrew your boots and seem to be moving on. The Spiderman costume you favored a few months ago has been replaced by Clone Troopers and Transformers. Lately you've been obsessed with Astro Boy (which, by the way, has a very confusing to a four-year-old death/grief theme that you've explained to yourself in such a beautiful and sweet way that I have no intentions of correcting you on it) and you've asked Abba to make you "an Astro Boy suit with boots and an E on the shirt." I have no doubt that you will wear that costume to pieces, just like the Superman one and the Spiderman one before it. I love when I go check on you before I go to bed, to find that at some point you got up, took your jammies off, and put on your Frankenstein costume. Doesn't get more Eli than that.

At school you split your time pretty evenly playing tag with the boys and playing house with the girls (you're usually the daddy or the dog). You have a sensitive soul and you worry that kids don't want to play with you, yet you never let this stop you from trying. I'm learning to step back and let you navigate this part on your own, figure out the playground rules because 1) I always sucked at them and 2) you're doing a much better job on your own than with my help. My heart breaks when I see the confusion on your face, but you keep at it and have a ton of friends to show for it. We're trying to teach you to stand up for yourself a bit more, and it seems to be working. Daddy just told me a story about you playing house with your friends when the house was "invaded" by other kids. Spurred by your wife's call, you rushed over, flexed your muscles ala Superman, and demanded they leave your home. I have no idea where you got all that, but it cracks me up to imagine. You adore your teacher, and the feelings seem to be mutual. Last week, as you were doing her hair, you told her you were taking her on a date to Pump It Up.

It's been so interesting to watch you with Sydney. I'm not sure you're so sold on this big brother gig, but the two of you play together more and more, and have settled into the family in a really nice way. You hate when she sleeps in your room because it means you have to be quiet when you're supposed to be sleeping, which, to be honest, makes it a win-win for me. On the other hand, every morning you come into our room and crawl into bed next to her, pull her close to you, and the two of you laugh and play together, sharing smiles in the early light. She beams at the sight of you, and you're doing a good job of being patient and sharing your toys (and your mom and dad). I know it's tough Kid, and I try to be understanding. I'm sorry if I sometimes forget how hard it is to be the oldest. I know that it's been an adjustment having to share with the baby, but you've been a champ.

One of the things you ask daily is "How much do you love me, Mama?" to which I reply "More than anything else in the world." It's so much more than that though. When you were born, you unlocked a part of me that made me complete. Before you were born, I felt like I was always trying to define my identity, always looking for that one thing that defined me. And then you came and made it crystal clear. I am many things, but above all I am a mama, and you made me that.

I love you more than space, 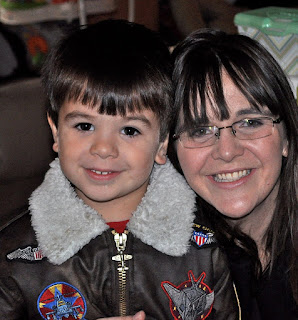 Beautiful! You have to remember that one of your readers is 6 months pregnant and can't read something this beautiful and not cry. I love your heart as a mother, and I love the amazing boy that you are raising. I look forward to see the man he will be. (I may copy you and do something like this for L)

This is so beautiful that I too teared up. Eli is so lucky to have you as his mamma!

totally made me cry. and reading the comments made me feel less freaky for doing so.