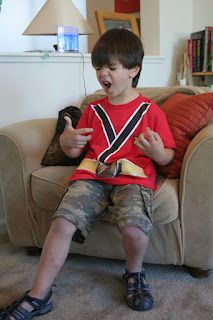 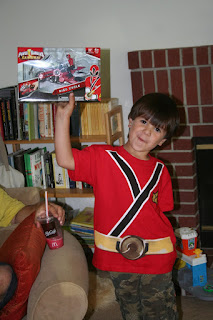 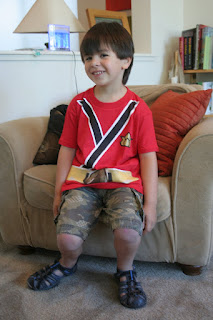 Pretty sure this is the coolest kid ever.

Not pictured is our playdate where the kids got all hopped up on IceBreakers, the trip to see the Avengers, and the kid's dinner of choice, a McDonald's Happy Meal (which he didn't eat. They never eat them but beg for them nonetheless. I should just put toys in bags of broccoli.)

And then the next day, he got on a train with my dad so he could spend a week at their house. He was so jazzed. And in true kid fashion, he packed his backpack with comic books, his DS, and his SpiderMan wallet. He grabbed his PillowPet as an afterthought. He strapped his golf clubs to his back (so cute!) and navigated the train station like he owned it. He was so busy on the train that he forgot to wave to me as the train pulled out of the station. Everytime I talk to him on the phone he sounds like he's having the best time. It kills me and I love it. As a friend wrote on Facebook, "Isn't it funny how the best thing we do as parents is teach them to live without us. And by funny, I mean torturous." So, so true. As I waited for his train to leave, I realized that he doesn't need me to hold his hand or remind him to say, "Thank you" anymore. I couldn't be prouder, but sometimes, just a teeny bit, I miss when he did.

Happy birthday! He looks so, so, so grown up. I feel like 6 is big-- disproportionately bigger than 5 was to 4, you know? Sounds like a great day.