I'm probably jinxing it, but I cannot believe how easy it's been going from two to three. Avery is SUCH a good baby, and she asks for very little. I mentioned to my OB how well it was going and she joked that this one was horrible birth control. But she was SO RIGHT! Seriously, this was my total freebie baby. We've settled into an awesome routine and she is just so perfect and squishy. She's on a pretty predictable schedule of three hour feedings and has been since the very first day. She's an awesome eater. She gained nearly a pound and a half between her two week and one month appointments and is topping the scales at a whopping nine pounds now. I had to put away the first outgrown NB size onsie this week. Though she has a strong voice, she rarely cries and when she does it's pretty easy to get her to calm down. She has a couple awake periods during the day, once in the morning and, awesomely, from about 10:00-11:30 at night. She spends that time sitting on our laps, in the bouncer, or lying on the floor and studying what's around her. I'm struck by how analytical she always looks.


The other kids adore her. I was worried about Sydney, but she's doing pretty well. She does try to crawl in my lap or she needs one of a million things when I'm nursing, but she also LOVES being a big sister. She and Eli have been more snarky with each other, but I don't know if that's just how they are or because of Avery. All in all we're having a lot of fun and I'm so happy that it wasn't as hard as I had expected. To be honest, I really expected that this would suck. I mean, I knew that I would love her, but I expected that we'd all be low on patience and that we'd be running around like headless chickens. I have my moments of "stimulation overload," and I've lost my patience a couple times, but I feel like this is totally doable. I even suggest that I take all three kids, on my own, when I run errands! 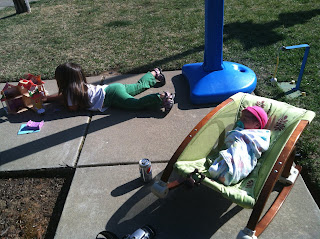 My recovery has been remarkably uneventful. I had hoped that because I didn't gain as much, I'd drop the baby weight quick and unfortunately that's not the case. Although I am a lot closer. I keep having to remind myself that with the other two I was still wearing maternity clothes when the babies were four months old. At least this time I've discovered leggings and haven't busted out the maternity jeans (much)! I got the all-clear for low-impact exercise, and I'm trying to mimic some of my GD diet in hopes that I can get this weight off a little quicker this time. Plus, I'm finding that I'm actually missing running. WTF? It's probably hormonal...And speaking of, today marks the halfway point of my maternity leave, and it's making me so sad to think about missing everyone's day again. It's been so awesome to be around all the time. Also, I'm dreading going back to pumping. I love nursing but I HATE pumping. Better to focus on how much pumping sucks than how much I'm going to miss this little peanut.

Awwww, sounds perfect! She's totally adorable, and I am so happy she's fitting in so well-- sounds like Cooper. You'll have #4 before you know it...

She is such a cutie pie and thank you for giving me hope about going from 2 to 3! I too hope to be pleasantly surprised with a freebie baby as well (although it is true it would be bad birth control!). So happy for you all!