So guess what I did yesterday? I woke up at 3:30 to the words, "Ready to make Tink your bitch?!" And then I did. 13.1 miles done! (according to my GPS, and those of the people around me, it was more like 14 with the walk to the starting line and weaving around people though) 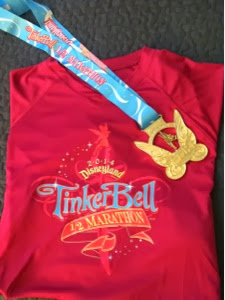 We picked up our packets and checked out the Expo the day before. It was super easy to get our bibs, but the Expo was insanely crowded. I managed to find cute compression sleeves (harder than you'd think) and my 13.1 sticker, but I abandoned my search for souvenirs for the kids. If I do it again, I'll go the expo the day before. I heard it was much better. 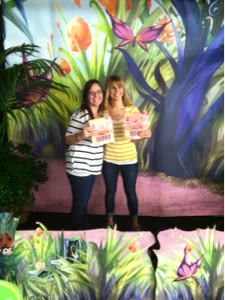 The race was so fun. It started at 5:00 am, so we were up and walking to our corral by 4:30. Even then, it was so packed that we got pushed to the next corral down. However, my new friend (on the left) was smart enough to jump up on the curb and we were able to get a thousand or so people between us and the sweeper van. The first corral took off at 4:56, and we anxiously awaited our start. And waited. And waited. And waited. Finally at about 5:30 we were surging towards the start line. We ended up logging a half mile before we even began. Totally counts, if you ask me. We also met some other fun people running, including sisters in matching tutus and a woman from Philly who flew out alone and ended up rocking the race in 2 hours 20 minutes.


We had agreed that we would not try to run together, since we'd never run together before and all had different approaches and paces. D (Goofy) took off right from the start but I (Hook) and I stayed together comfortably for over ten miles! It was so fun running together and I'm thrilled that we have similar paces. We jockeyed with D throughout the race, which was also really fun.

The race went through DisneyLand, California Adventures, and the streets around the parks. Who knew there were houses so close to Disney? The lights were all on when we ran through the parks, and there were a ton of cast members (Disney employees) standing by to cheer us on. I think the cheering is my favorite part of racing. My favorite part inside Disney was running past the carousel, where there were a bunch of men dressed like the Lost Boys riding the horses. They were cheering for all the runners until they saw my friend (Hook) and I. Then they started booing! Outside the park, the Red Hat Ladies had staked a good solid block and had filled it. There were so many women yelling and clapping and cheering. My hand was sore from giving so many high fives. So, so cool. I was grinning and yelling "Thank you!" the whole time.

I would say that at least 75% of the runners were in some kind of costume. Lots of wings and tutus, but I also saw princesses, Wall-E, Pinnochio, and two Olafs. I saw an older man run/walking with a sign on his back that said, "There will be days when I will know that I can't run, and that I certainly can't run a half marathon, but I will have a lifetime knowing that I did." Nearly burst into emotional tears on the spot.

I split off around 10.5 miles, so I finished the race on my own. I started to feel sad that my family hadn't come, but I focused on all the people running with me and cheering from the side. Around mile 11 I hit a wall. My feet hurt and my music sucked and I was tired. I walked along the side and pulled out my phone to switch my music. When I pulled it out, my phone was blown up with text messages from C, my dad, and my brother. They'd been tracking me and had sent texts at ever check point. My brother wrote to say that he was waiting at the finish line. It was just the jolt I needed.


And then there it was! It was so amazing to run across the finish line. When I set out to do this, I really wasn't sure that I'd see it through. And here I was, finishing strong, and already anxious to plan my next race. 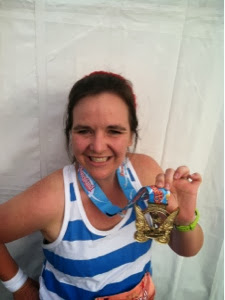 As it turned out, despite the fact that we split up, we all finished within ten minutes of each other. I and I finished within one second of each other and had no idea! D probably would have been closer except that she got flat-tired at mile 12 and had to put her shoe back on.


I still think that my ideal distance will be a 10K, but I will definitely do another half. And I'm a tenth of the way to completing my goal of 10 t-shirts.

Love, love, love this!!! So proud of you. I'd guess someone had to finally slap that smile off your face. Congratulations!

So proud of you!! You go girl!!
Olivia