My first born turned ELEVEN last week. I think I was having some feelings about the man-child (obviously) because it took me a long time to write his birthday post. This kid. This kid made me a mom and has taught me so much in his eleven short years, not the least of which was learning to appreciate and love the kid you have. He is such a unique human being and I'm always in awe of the thoughts in his brain. His age is finally starting to catch up with his dry sense of humor so you can tell if he's being sarcastic. He still loves WWE, but he also loves Scouting and football and conversating. He is an awesome conversationalist, btw, and he is always piping in with some random conversation starter.

The major birthday gift was a week long wrestling camp, and my folks paid for him to stay in the dorms. I've sent him out into the woods with dozens of tween and teen boys with no problem, but sending him to sleep in the dorms freaked me right the fuck out. So much that we even got him a dumb phone. The first thing he said was "I feel so independent!"
So the day after his birthday he and I drove to the coast so I could drop him off at camp. 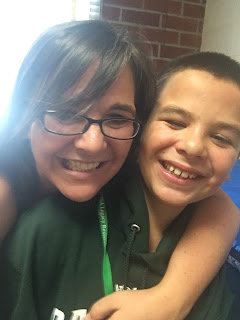 He had an awesome time all told, though I think the first night was pretty tough. Luckily my folks were able to watch a session each day. I think that helped. I also think the free access to Monster energy drinks didn't hurt. He quit responding to our texts after the second day, I think because he knew we could tell he was all amped up.

I'm really excited to see what the next year holds for this one. I'm hoping that it involves a lot more adventures and deodorant.

OMG that picture in the dorm made *me* tear up. I have until November to come to terms with Eleven, but I don't think that's enough time.