OMG. I totally had a case of writer's block, and then so much time passed that it seemed like I had to catch y'all up before I wrote about any of the new stuff, and before I knew it we missed all the things. Brace yourself. I'm going to get us caught up, and then I'll tell you all about the crazy woman who let her snotty toddler crawl all over me during my first EVER sports practice that I could actually sit in a chair and not parent for. Or maybe I'll lead with that. This speschul sneaxflaxe mother first started commenting when I tried to read my book (The Secret History of Wonder Woman. SO GOOD and I wanted to read it SO BADLY). She even gave me the "Oh man. I haven't read a book since I was nursing! That's the last time I could sit down long enough. But I've decided now that my kids need to know that mommy get's her time too!" Yes. I totally agree. That's why I brought a book to my kid's soccer practice. SO I COULD READ IT. But oh no, then she has to narrate. "Oh Wonder Woman! Look *daughter*! We watch that at home. Not the new one, the old Linda Carter one." But not in a conversational way. More in an observational way that meant I didn't know if I was being rude by responding or being rude by ignoring her. So I tried both and neither worked. And all the while the girl is asking me questions. "Who's that?" "Wonder Woman" "Who's that?" "That's Wonder Woman too." "Who's that?!" "They're all Wonder Woman." "Who's that?!" "Elizabeth Warren. Or maybe Wonder Woman"  So obviously reading wasn't happening. I started texting a friend, which we all know is the universal sign for "I'd like to not have a face to face conversation with you or your children." And this lady's kid CRAWLS IN MY LAP, with her mother watching, and starts asking if I have games. No? How about shows? No?! What about emojis? WTF kid? Also, dear mom. Don't smile lovingly while your daughter crawls in a strange woman's lap. I work in a prison. I'm trying to be nice but I'm also saying, loudly, "Oh no Sweetie! I'm talking to a friend. Please don't touch that. Nope, no games. Just boring stuff."  Seriously, WTF? FORTY FIVE MINUTES later, I had to physically move this kid so I could pack up when the practice was over. Next week, I'm bringing the hellbeasts. And they're wearing the crazy chain collars that make them look like monsters.

Okay, now I feel better. In other news(and no particular order): 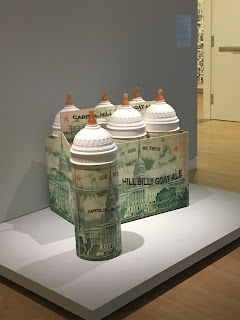 Scout is totally SMILING in that picture. I love it! Also, the poor lonely soccer lady-- you're way nicer than I am.