I haven't blogged in FOREVER, but I just realized that I never finished out 2017. So I'm going to do a brain dump so that I can start fresh with my 2018 musings, starting with the new job that I start in a week (!)

After Christmas my dad wanted to go to the city for a few days. He rented our room as our Christmas present (thank God because I never could have swung anything that nice) and we hit San Francisco HARD. It was so fun! The city was still holiday-ified and there were a ton of crowds, but there was also a foiled terrorist attack so it wasn't as crowded as it could have been. I'm calling that a modern silver lining. 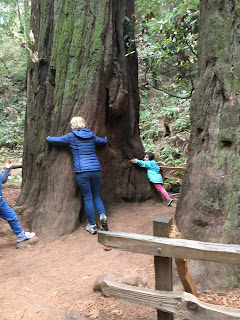 The girls LOVE the Junior Ranger program. Both of the National Parks we went to this week had cool wooden badges that Avery especially treasures. They really get so much more out of our visits thanks to the program. I highly recommend it!

We did the city with no car, which meant some creative problem solving (lots of ubers, which made me super grateful that I impulsively bought a Bubble Bum before we left. If you're traveling with a booster-seat sized kid and wanting to use public transportation, you should check it out.) The kids wanted to ride the cable cars one day. However, we got there to find that there was an accident and the current wait was over 2 hours. C, in perfect form, of course found a limo driver who was willing to shuttle us all to the piers for $5/person. We all piled in and this angel handed us Bud Lights at 10 am. The kids are STILL talking about "Tony" and his awesome tour. This was probably the highlight of their trip.

The trip really was fortuitously blessed. After our limo ride, which included stopping at every cable car stop so one of the kids could stick their head out the sunroof and tell the people waiting how long it was going to be, we went down to the pier and to the San Francisco Maritime National Historic Park. A park ranger asked if we'd like to try a new technology tour and handed each kid a smart phone. She then took us on this awesome, private, FREE tour of the park with this app-based tour game. (Agents of Discovery, super cool if you go to a lot of National Parks!) This ferry was my favorite part, and we got to go under the ropes to the pilot house. I love all things cozy and efficient so this did not disappoint. 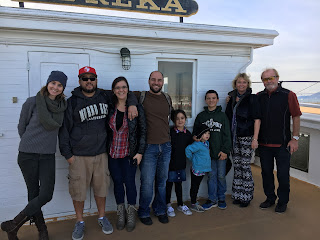 One of my dad's bucket list items for the trip was the Exploratorium. I don't know exactly what I was expecting, but OMG this place was awesome. We bought a membership at the end of the day because there was NO way for us to be able to see the whole thing in one day. Sometimes I'm really grateful to live so close to the city to make going to an awesome museum for the day feasible.

They had an exhibit called Curious Contraptions, and within it they had a "Tinker Lab." The girls both made automata with the help of these awesome volunteers. Syd was thrilled to have unfettered access to the hot glue guns and Averson happily made a Barbie closet and then reluctantly agreed to let the nice lady help her add a rotating crown stand. I'm pretty sure it was a pity-allowance. 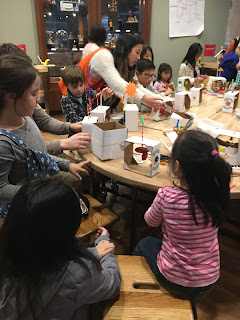 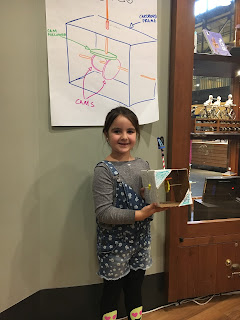 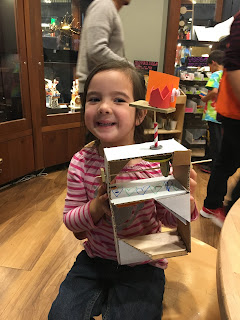 Oh my goodness! Talk about going out with a bang The limo is amazing-- would be my fave part, too!