A MONTH (plus some), floods, Frankestein, and huaraches

Do you ever get sidetracked (by say, buying a house, moving, holidays, life) and think, "Gee. I should really write a blog post!" but then you think, "Damn. It's been a while. Where do I start?" so you don't, and then before you know it a month has passed and some big stuff has happened and... Yeah. Me neither :)

So in no particular order:

We bought a house and moved in. We pushed up the move date to avoid paying a rent-back, which meant that it was the most cluster-fucky of cluster fucks and most of my stuff got moved in garbage bags and laundry baskets. The house is AMAZING but OMG. So many projects. Basically everytime we turn around some plumbing thing is broken or my damn dryer is still not drying. But the house is amazing and we love it so so much. It's basically like living in Disney Land.


We had Halloween (and I turned an anticlimactic 38). Eli dressed up as his dad in a ploy to steal his dad's letterman's jacket, Sydney was an ultra-convincing Wednesday Addams, and Averson was Frankenstein's Son. She was adamant that she was "Frankenstein's Son" and that she wear a tie. I'm going to miss these guys when they stop dressing up. Also, a lot of people, like more than reasonable, asked if Syd was a nun. Is that a thing, where people dress up their elementary school kids as nuns? 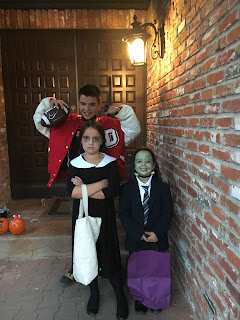 The supply line to our dishwasher EXPLODED and flooded our kitchen with hot water. C fixed it because he's literally the best.


We roadtripped to Colorado for Thanksgiving, but that seems like it deserves it's own post. I also need a better house post and a post to talk about how Orangetheory called to ask me if I was ever coming back (jury's still out. I may just stay fat.) I have missed this place and now that I'm only a couple week's behind, hopefully I can stay on it again!
Posted by Chiconky at 10:00 PM