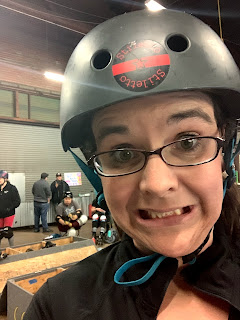 A friend from work, who is WAY cooler than me, plays on a local roller derby. I'd fangirled over this enough that she had the crazy idea that I might be interested when her league offered a "Roller Derby 101" class. Obviously I couldn't be lame, so I committed to trying it out. And then promptly freaked the freak out over the next few weeks because I kind of forgot that I've only roller skated a handful of times.

The night before the first class, I had a nice little pep talk with myself and decided that I'd commit to going to three classes. If after that I hated it or felt stupid, I could stop.

The first night, I carefully picked out my roller derby outfit and headed downtown. DEEP downtown. The practice was in a warehouse in a pretty not great part of town. I'm not sure what else I expected? Once I got there and signed in, they directed me to huge bins of loaner gear and I picked out skates, pads, and a helmet, and then one of the real skaters helped me figure out how to put it all on. Why do they look so cool in their helmets and I look like such a doof? My skates have these really cool patches on them though that I love a lot. Makes up for the weird cheap mouthguard.

Guys? Roller skating on a derby floor, on derby skates, is HARD AF. The first night was all about "derby stance" (basically a sustained half squat), single knee stops (basically sliding on one knee), and "sticky skate" which I've decided is the one skill that I want to nail down by the end of class. Also falling forward, which I failed at emphatically, causing me to swear loudly and spend the last week Googling "I think I broke my butt."

But come the next class I felt like, if I did break my ass, it wasn't enough to keep me from hitting my three class goal. I'm proud to say that this week I only fell once, and because I was better at derby stance it was from a MUCH lower altitude. I'm still not a good, or even reasonable, skater, but I can toe walk which maybe eventually will turn into a jammer start (look at me speaking the language!), I can single AND double knee stop, and I got way better at the sticky skate. Now I want to master the cross-over skate without tipping over or slamming into a brick wall.

I am EASILY the lamest skater in this class. Some of the women (and one man) have been doing this for years and they're REALLY good (and also? maybe they should take a 101b class for the people who aren't really new?) I was worried that I'd be the lame middle aged mom, not even considering that I'd be a lame middle-aged mom who can't stay upright. But everyone's so nice and encouraging. And it's such a mix of people! There are other middle aged moms, cool hip 20-somethings, a couple ladies in their 50s+. There's yoga pants and cool skater shorts and one lady that wears a tennis skirt unironically.

Next week will be class three. My goals are to be able to wear my mouth guard without gagging and to try going a bit faster. All the coaches have told me that a lot of these skills are easier faster, but they've failed to mention how to slow down. I think I need to just embrace the idea that I might crash. I guess if my ass is broken, I can't break it much more?
Posted by Chiconky at 7:52 PM

Email ThisBlogThis!Share to TwitterShare to FacebookShare to Pinterest
Labels: fitness