You might remember the menagerie post from early quarantine, followed up by the addition of Taco the tortoise. Now that we're a year into quarantine, I figured an update was warranted.
Taco is doing wonderfully and we're all low-key obsessed. He's gotten a little bit bigger, but not so big that I don't anxiously worry when C and the kids take him outside to play in the grass. He loves sprouts, dandelions, and getting his booty brushed. 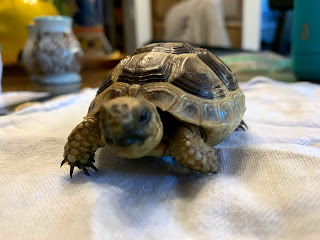 I haven't seen Francisco since I posted. We had to get the tree trimmed and the trimmers alluded to some "creatures" that they "took care of" but I'm really hoping that Francisco was smart enough to make himself scarce.
Shortly after I posted originally, my mom noticed that Emily and Cauliflower were getting much less active and convinced Averson to release them back to the wild. However, they were only the first in a long line of domesticated snails in the house. Most recently she purchased two milk snails, assuming that snails bred in captivity might tolerate the life of leisure better. We were all hoping for babies, but that hasn't panned out though they do seem to like their upgraded digs. She also has added two more small garden snails that we found outside. So we have a bit of a snail community. Last weekend I was trimming back the ivy (hoping to find a sign that Francisco is still around) and I found a GIANT garden snail on the flower pot. I sort of off-handed told C and my mom and they decided that we might need to add this one to the crew too. Shortly thereafter there was a HUGE commotion on the front porch. IT WAS CAULIFLOWER! We had put a small drop of nail polish on his/her shell to tell them apart. I imagine that poor Cauliflower has been banging on the front door this whole time trying to get back to the land of limitless arugula.
At the beginning of the pandemic, I saw a post on Facebook by a woman who was looking to rehome her daughter's goldfish who had grossly outgrown their tank. I let her know that C would treat him like his own and that we'd be happy to add him to our pond. Great, wonderful, everyone's happy. C being C though felt bad for the little girl and offered a swap for one of his smaller fish. He and my mom thoughtfully picked a fish from the pond, caught it, and got it ready for delivery. Eli was going along for the ride, and about ten minutes later decided that he felt sad for the poor little fish being plucked from his home. So he and C stopped at PetSmart to buy a decoy fish for this stranger who, I suspect, was not all that excited about swapping out her fish in the first place. C came up with a back story, they hid the saved fish in the backseat, it was a whole thing. So Nemo joined the pond and "Gary" was safely delivered to his new family.
Fast forward to a couple weeks ago and I get a random message from Nemo's family. Gary has now outgrown the tank and she wants to know if we'd like him back. 1) What are these people feeding their fish? 2) I'm really hoping they don't ask about Nemo since he met an unfortunate, racoon-related demise shortly after joining our crew. We agreed to rehouse Gary but this time I did NOT offer a replacement fish. This was turning into a weird symbiotic relationship that I wasn't totally interested in. Eli and I went to pick Gary up, and again Eli bonded with the fish. As we drove home, he quietly asked "Do we HAVE to put him in the pond?" And this is how my teenager and I ended up impulsively buying an entire fish tank set up for his room. Eli is OBSESSED with Gary and it's basically the greatest, sweetest thing that's happened lately. 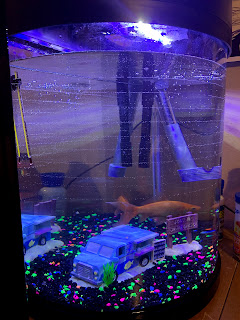 The pandemic really needs to end because I'm running out of room for creatures and Averson's getting some wild ideas in her head...
Posted by Chiconky at 11:06 AM