I swear I didn't teach him this

So far, Eli has done great with Sydney and is adjusting pretty well to having another kid in the house. I worried because he's not the most "independent" kid in the world and it's hard for him to entertain himself for any significant period of time. I also worried because he's been The Only for so long that I thought he'd freak at having to share attention. But, for the most part, he's done great. The only place I've seen a huge change is when it's time for him to sleep. What used to be a small quick fight is now an all-out war. He negotiates, he screams, he cries, he has to be sent back to his room dozens of times after coming out with one more "I have to tell you something. Um um um..." What used to take 20 minutes is now taking hours. I suspect it's that he doesn't want to miss anything, but it's driving me up the wall. Plus he's not going to sleep until 9:30 some nights, which makes for pleasant days.

So the other night Eli was getting riled up for a particularly good tantrum and he yelled for my mom from his door. She went in, heard his newest plea to stay up, and finally asked "Eli, why are you being so crazy about bedtime?!" To which he replied, "Well, if I'm crazy than you can't be mad at me." Does anyone else hear a future defense attorney? 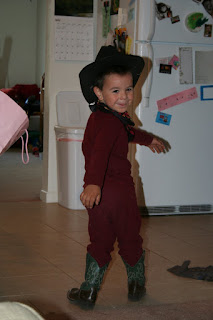 That is a stinkin' adorable picture of E!!!