I've talked about our cat. We also have a late-middle-aged border collie mutt who may well be the best dog in the world. She's moved across the country three times and had her position in the family userped twice by beings that poop in their pants. She's horribly neglected but would never think to complain about it, especially now that said beings are dropping food on the floor regularly. Between the two, I was pretty sure we were done with pets. Fact was, once the kids came we sort of sucked as "human companions" (I have an awesome story that goes with that term. I'll tell you sometime. But not today.) Turns out though, that I was wrong. And this time the pet is much more my speed. Minimal care required and doesn't shed, bark, meow, wake me up, or mess up my furniture. 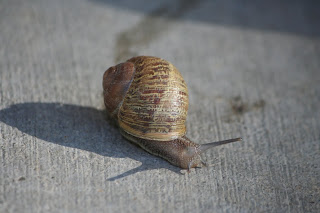 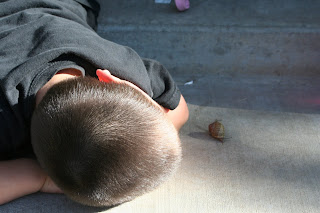 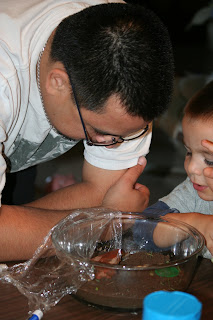 We've kept him alive for a week now, including an unfortunate accident that rendered him a "differently abled" snail. So far so good...

Welcome to the family, Snaily - and good luck in captivity. I'm afraid I accidentally caused the demise of several of your cousins. I swear it was a late night snail migration and every step I took crushed another one. So sorry.

Might that be the same one we found when I was there?