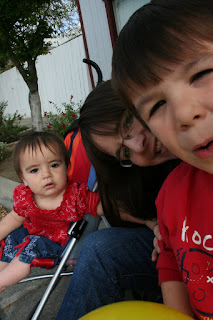 Eli LOVES a rodeo, and this weekend there was a huge one in town. However, tickets were a lot more expensive than I could justify, given Eli's fickleness and my anxiety with two kids in a crowd. So we comprimised and went to the (free) parade, which was early enough no one was drunk and the crowd was completely manageable. The kids loved it! Syd clapped for every single entrant and Eli was all rodeo-ed up after seeing each of the 341 horses. Two and a half hours later they had outlasted every other person on our block. 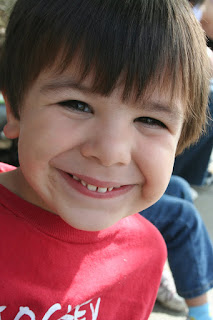 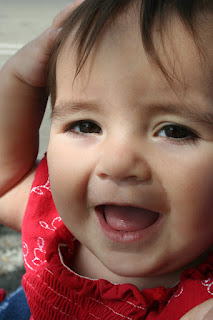 If I was being snarky, I would tell you about the woman who sat next to us with her family and attempted to take 8 million pictures/videos/etchings of her children holding hands, which obviously was not happening. Also, they had pretentious names. So, for example, "James Erik! James Erik! James Erik put your hands down! Hold Tiffany's hand! Hold her hand! Hold hands you two! Look here! James Erik! Tiffany! Look here! Look at mama! PUT YOUR HANDS DOWN! LOOK HERE! JAMES ERIK!" Over and over and over and over. I really just wanted to slip her a Valium. I might also tell you my suspicion that the parade was segregated, as there was a noticable pause and then the rest of the parade was all Mexican dancers, cowboys, musicians, Native American dancers, and a few karate schools. Hmmm... BUT, it was a great time, and my kids coordinated without any input from me. So let's focus on the adorable 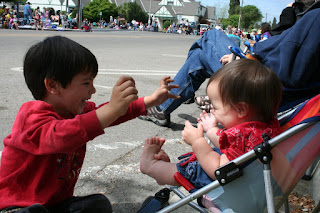 And not on the one-armed man who forced his horse to ride on top of a trailer for an entire parade while he cracked a whip (cool, but the horse was obviously not digging it.) Also, he tucked his non-arm in his belt and I can't figure out why. 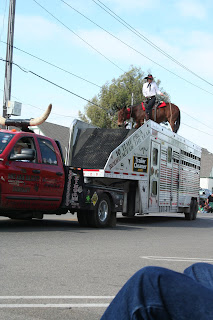 Looks like a great day out. Maybe it's just me, but there's something sexy about a one-armed man on a mule with a bull whip. Love the picture of Eli entertaining Syd,

He also had a mullet.

A mullet AND one arm while riding a horse on a trailer?? I can't believe we missed out on the parade this year!