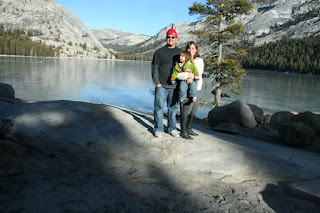 Eli loved taking pictures all weekend. I see a camera in that kid's future.


I told myself that I wasn't going to freak out until after Christmas was over, and I stayed true to my word. We had an amazing Christmas weekend. Every year since we moved to California we've gone to Yosemite on Christmas Eve Eve. Knowing that this might be our last year, and we made the most of it. It was amazing! We stumbled upon a choir at the Awahanee (a super fancy lodge) and the kids were thrilled to hear that Santa was on his way. Definitely our best Santa experience yet. No laps still, but Syd didn't claw my face trying to get away, and Eli was brave enough to reach in and take a toy (stuffed squirrels! Adorable!) from Santa's bag. 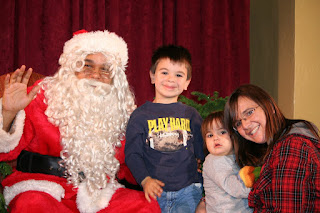 Plus, for the first time in years you could get to Tenaya Lake. It was completely frozen over, so Eli was able to finally test out the skate-trainers my boss lends us every year. Syd loved sitting on the sled and playing with the ice. 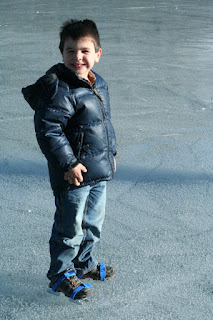 We came home and gorged ourselves on spaghetti and meatballs. Eli schemed how he was going to stay up and see Santa, but decided "not to risk it" after we told him that if Santa knew he was awake, he wouldn't come. Which meant no presents for him OR Syd. He compromised by asking if he could stay up later than Sydney. Then crashed about ten minutes after he left cheese and crackers out for Santa, because he figured that Santa probably needed something more substantial than just cookies (and he ate the last one). 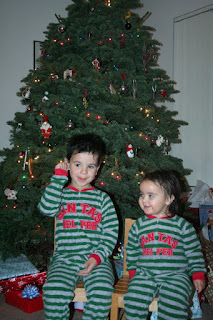 I want to dress them alike every day

In the morning Eli was up at 5:30 whisper-begging to either get up or watch a cartoon (OMG. Totally a post for another day but the kid is obsessed. Like 12-step obsessed.). C made him wait until 6:20 to get everyone up, and luckily Syd woke up at about 6:15. We all trooped down the hall to find that Santa had brought Eli "THE SPIDERMAN HOUSE!!!!!" and Syd had a brand new, very pink, shopping cart and Abby Cadabby doll (the first of many babies of the day). 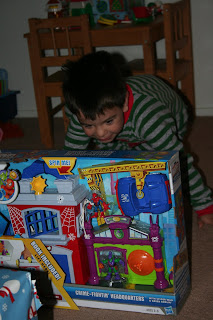 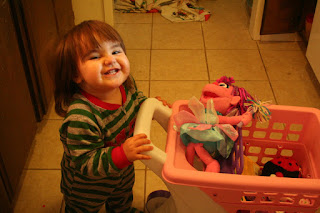 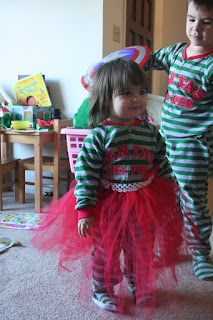 The skirt was a hit! So were the blocks and the wood peg people, but I forgot to take pictures. I'll try to get one soon. The people have already become well traveled and segregated into "cool guys" and "everyday guys." I've been chastised for not including a Black Ranger. So overall, total win. 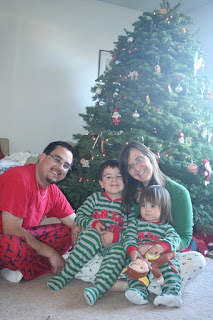 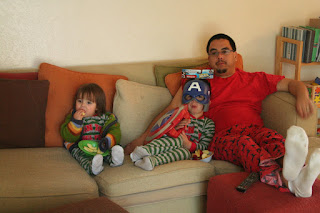 We finished off the day with a family viewing of Captain America, popcorn, and apples. Absolute perfection.

Turns out Christmas ended at 7:00, because that's when the freaking out commenced. I was hit with an almost unbearable need to take down all the Christmas stuff and start packing. I resisted, mostly because we had company, but did wake up and put together all my packing supplies. In a box. With a sharpie. And I feel a little better.

Everyone agreed this was one of the best ones yet. No one projectile vomited all over the room, we had a once-in-a-lifetime chance to see an amazing lake and play on the ice, and Christmas itself was easy and perfect. Homemade Christmas was a huge hit. My dad asked me, "If money wasn't an object, would you do it again?" After not-much thought at all, I said that I definitely would. This year I enjoyed the gifting process. I put a lot of thought and effort in, got to work my creative muscles, and I never once had to go to Target.

How was your Christmas?

I am having major envy right now. Our Christmas was awesome but no Tenaya Lake or Yosemite Valley. I LOVE Tenaya Lake, my elementary school even shared the name. So I am really jealous that you got to the inconceivable and see it frozen! That is a great Christmas Eve tradition, next year it will have to be Tahoe or San Fransisco. BTW I LOVE the match PJ's! I do it, so freakin' cute!

Wow, your Yosemite pic is incredible. I have never been there but the photo makes me want to take a trip! I love the family photos of Christmas; esp E with his Capt. America hat during movie viewing. Congrats on fending off the freak-out until after Christmas, that is amazing!!