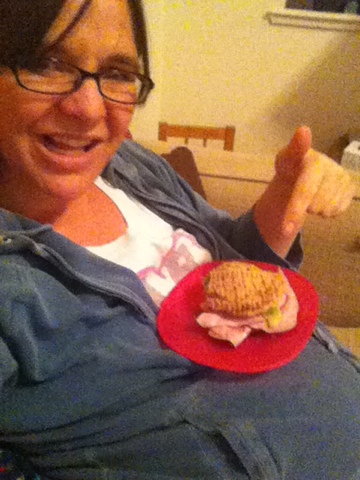 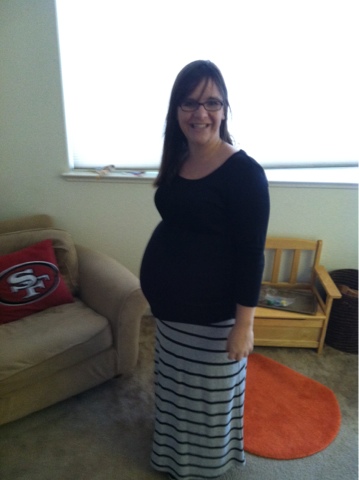 The doctor keeps asking "How do you feel size-wise?" which 1) is a very weird and awkward question to ask a very pregnant woman, and 2) obviously has no right answer. The best I could come up with is "A little smaller than last time?" since a lot of my maternity clothes still don't fit. I didn't want to geek out and pull up my blog during the appointment, but since you all already know I'm a huge, neurotic geek I present for comparison. I finally got her to say something about her "smaller baby" comment, and she says that this one probably won't be another 10 pounder. "More likely another 8 pound baby, definitely not a six pounder." I guess "smaller baby" is all relative.
I'm feeling a lot more pregnant lately. Very round and awkward, which is awesome. I also count down until I can plop on the couch for the remainder of the evening. The plopping is lovely. Not so lovely is the stupid GD stuff, which now requires a 30 minute walk after lunch and dinner, and a VERY restricted diet. I'm eating an awful lot of broccoli, salads, and eggs. A ham and cheese on a sandwich thin if I'm feeling crazy. I maintain a near inappropriate relationship with peanut butter as my last bastion of normalcy. On the plus side, I gained less than a pound last month and unless something catastrophic happens I won't be walking into the hospital with a 60 pound weight gain this time around.
And Baby Waldo has a birthday! 3/1/13 (which I totally love for it's symmetry) at the butt-crack of dawn (which C is already complaining about, but whatever.) I've got six weeks left of work, which is more than was recommended, but I figure that if I'm home much longer than that I'll drive C insane with constant lists and nagging. We haven't done ANYTHING to prep for this baby. There's a crib mattress in my Amazon cart, and I have big plans to paint the crib (but haven't started). He'll do much better with a few hours off from me every day. We have come up with a back-up/first choice name, so that's awesome and complicates thing's a little bit. Eli's still voting for Stephanie or Mittens, and Syd insists that we call her Waldo (or Jeffrey or Marcus) but I like the ones that C and I have a bit better :)

Beautiful. The comparison picture is impressive, but you were much bigger by the end. This "tiny" baby looks good on you.

You are looking great Corey and I too would have wanted to whip out the comparison picture! I'm sure that GD diet sucks but way to go in sticking with it. Great birthday too, how exciting!!

My doctor asked me that, too-- maybe it's a new trend. We should check the OB journals for an article on new bedside questions... I was like, um, I feel like my stomach is normal and my butt is huge. He was like, "Oh. OK."

You look awesome-- you are super tiny with a basketball belly-- perfect!