My second half marathon of the year! I was grossly underprepared but I still beat my previous time by a full minute :) I had complained to C that Tinkerbell was so "theme-y" that it didn't really feel like a half marathon (despite being 13 freaking miles!) This one was the exact opposite. This one felt overwhelmingly legit. I'm not sure which I prefer. I missed the on course entertainment but I did not miss the ridiculous crowds and the wing dodging. 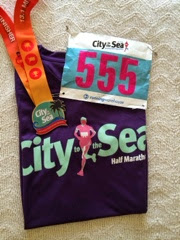 I ran this one with my brother and sister-in-law and it was so fun. We talked and laughed the whole time. 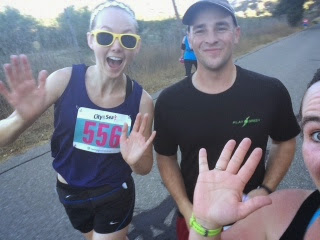 We also ran, in parts, with my friend D from the Tinkerbell. This was her fifth half this year! She's a beast. A really fun, positivity spewing beast. 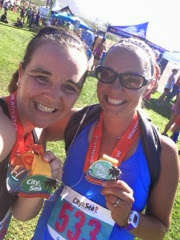 This was the first run where I had actual pain, forcing me to go slower than I would have liked. I was on pace to finish between 2.30 and 2.45, and getting very excited about it, until my knee flared up. A few miles of the course were on roads that were banked and I'm sure that's what did it. It was right on the line between discomfort and injury so I held back. Also, it hurt like a B to run too long. I have a trail race I'm really excited for in two weeks so I wasn't willing to risk it. I'm so glad I didn't push myself too far. I'm sore today, but I think I'll be back to running in a couple days.
This was also only the second race that C and the kids have gone to as spectators. He ended up finding me at two spots on the course and then at the finish line. I think my favorite favorite part of the day was high-giving my kids at mile 7 and again right before the finish line. 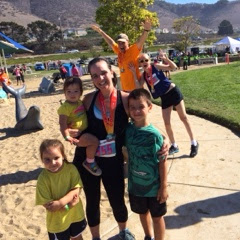 It occurred to me this morning that this goal is actually going to happen! I can't believe it. Seriously. Three more and I'm done!
Posted by Chiconky at 2:04 PM

Good job! So glad you had a blast. Hope your injury heals fast - two more to go. Love you!

I wish we lived in the same city. I would run a 5k with you, (IF that is not too short!)
Good job girl, you are awesome. You look great as always!!