So, there's no pre-race selfie because I ALMOST MISSED THE RACE. This was a marathon relay and I was given the third leg, which started at the halfway point 13.1.) I did basic math, subtracted an hour, and left for the relay point. 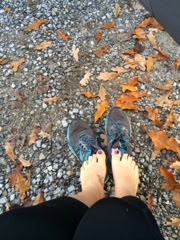 Putting my shoes on outside to trick the dog. Totally didn't work.
So I drove ten of the fifteen miles to my spot and literally couldn't go any further. After driving like a banshee through residential neighborhoods, I managed to gain another two miles. I called a teammate for an ETA of the second leg runner and realized I wasn't going to make it. So I screeched into the parking lot of perhaps the most ghetto sports bar ever, threw on my gear, took a final swig of water, and joined the race. I ended up running 10.04 miles (instead of the seven I'd planned.) My first mile was great, but I really struggled with my pacing for the rest of it, so I alternated running too fast and walking. I think all the adrenaline wiped me out. That and there were a LOT of hills. My legs are aching already. 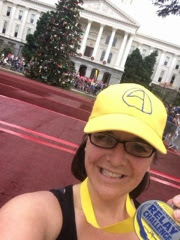 But I made it and my time wasn't awful. I beat my Leg 2 runner by about two minutes and found my Leg 4 runner easily. Then I jumped/hobbled onto a school bus to the finish to meet up with the rest of the team. 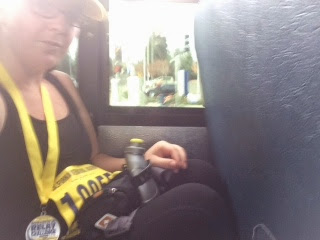 So tiny! And I'm not a tall person. Also, this bus REEKED. 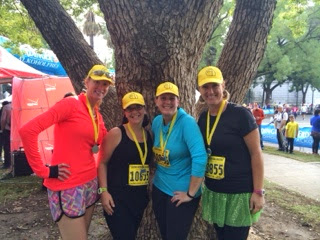 Our team. I'd only ever met the girl in the skirt, who was not on either side of my run of course. 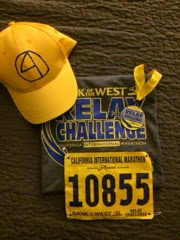 The shirt is not cute, but this will always be my "Never give up!" race. Also, a reminder that I don't need to do this kind of race again. It was fun, and the course support was amazing, but I think for me running is definitely an individual sport.
Posted by Chiconky at 9:03 PM

Wow to all of it! Well done, pilgrim. I think relay running could be fun if you knew your running mates.

So incredibly proud of you!!! Wish you were doing the Disney tinker bell one again!