I always regret not posting more, but then I also feel like I don't have a lot going on that's "postable." So then I don't post and it becomes a vicious cycle. SO, I'm going to post every so often just because. It may be boring drivel but it will be on the internet, dammit!

I went to a birthday party today where the moms took over the coloring table. Now I want to throw a party just to have an adult coloring table. It was so lovely and the moms actually talked to each other and I didn't leave the party having consumed an ungodly number of Valentine candy corn and chips and guacamole. AND, no moms screaming at their kids. Seriously. Let's make this a thing. 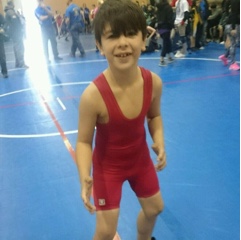 Yesterday Eli had his first wrestling match and got fourth place! Out of more than four kids! He won his first match by pin, and lost to the overall champion in overtime (right?, is that the right word?) I'm so proud of him, but also a bit surprised because he jacks around A LOT during practices. C said his coaches were surprised too so I'm guessing they had the same expectations. But now he's got the bug. I've heard that wrestling matches are heinous because they're all day and your kid competes for all of two seconds, but I like this sport for him. And maybe he'll stop trying to body slam his sisters and pick me up. 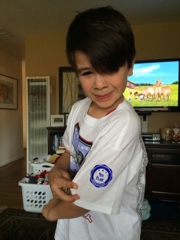 I'm back to teaching tomorrow after a few months off. I'm sort of nervous about going back to the long days. On the other hand, we have missed the extra income something fierce. Hopefully we can get a little caught back up. Or I can spend more money at Target. Either way... I'm also spending the next two weeks at a training that's a good commute away. I was a super bitch last week after being on vacation. Two weeks of boring training an hour+ away should make me super friendly and charming. But I get to wear jeans. So yay!

I am 100% in favor of you posting often. I LOVE your blog. I LOVE hearing what is going on in your head, and your perspective helps me keep mine. Bring on the random going ons and occasional rant. Can't get enough. XOXO

And he is too cute. That wrestling sounds like a good investment of time.