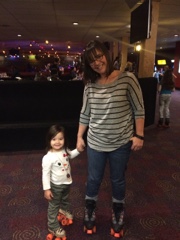 Last weekend, Syd was invited to a Princess Roller Skating Party, which was basically the most awesome thing ever. It was like tiny roller derby. Syd loved it, and the rink had little locked-wheel skates for Averson. I'm much more of a rollerblade girl, but I have secret dreams of joining a derby team so I'm all over trying to figure out how to skate on four wheels. 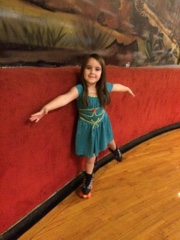 Coincidentally, the Bigs' school also had a fundraising night at the same roller rink tonight. So twice this week we've been roller skating. It's 1972 up in here. It was just as much fun with the boys! Eli actually hung out with friends (he often regales us with stories of how everyone hates him, so nice to see that's not true). He also did a couple laps holding a girl's hand. OMG. He got a lesson in gentlemanly behavior when we got home. 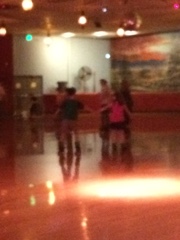 Averson was a beast because we got rid of her nap after realizing that she was lying in bed for an hour singing to herself, so now she's totally heinous between 5:30 and 6:30 until we start bedtime. So that was fun. But she also let go of the walker to hold my hand during Friend Skate. Kind of like her a lot. 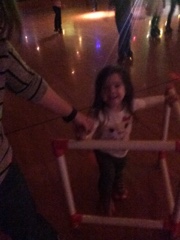 C and I only fell once each. I was avoiding taking Syd out and landed smack on my ass (and phone, ouch). I missed C's, but I'm assuming he tripped over air. Poor guy is such an athlete, but strap some wheels on his feet and he's totally out of his element. He tried though. And I think it didn't-suck enough that I may actually get them all to go back there. Wholesome family fun FTW! They also have nachos. Nachos are the best
Posted by Chiconky at 8:56 PM

Oh! That looks like the best time! Lots of laughs, sore butt, and nachos. Life is good.