That stands for Thank God It's Fucking Friday, for the uninitiated. Today was a roller coaster! The dogs woke me up at 3:00 because I'm really just a glorified doorman for the two and four-legged beings. Then I woke up this morning craving a breakfast burrito so bad that I contemplated taking an hour of personal time so that I could make one. But I decided to be a responsible adult and eat my damn banana at my desk like I do every. damn. day. Then a work friend stopped by my office and offered me a burrito! Who does that?! So we were off to a good start.

Then I get bombarded by custody staff who are at their ever loving wit's end with a guy, we'll call him Joe, who keeps setting fires in the hospital unit (which they sort of dislike.) Apparently I'm known as the "asshole whisperer" so I get tasked with trying to figure out a way to keep everyone from killing each other. I had the pleasure of assisting the officers with escorting Joe earlier this week because he's convinced they're going to kill him (they're not.) They're convinced he's a jerk who keeps setting fires and making spears. So while we're discussing what to do with Joe, an alarm goes off in my treatment area. Foreshadowing. It's Joe.

Fast forward twenty minutes and now Joe is in an open air holding cell (like a mesh phone booth), screaming at everyone. I get called down and when I get there they tell the custody supervisor and I that he's, brace yourself, spraying people with his colostomy bag.

I'm just going to let that sit there for a second.

Yep. Now I'm faced with either letting this guy continue to spin out of control (because, in case it isn't quite clear yet, this guy is sick sick sick) or trust him when he says he's not going to spray secondhand shit all over my shoes. I was very much regretting my capris and loafer choice right about now.

So I trusted him and thank God it worked out because the damn dog ate my other good work shoes.

So we got him calmed down and admitted to the hospital so we could get his meds straightened out. I didn't get shit on. Some other really boring stuff happened and I managed to NOT tell my boss "I told you so" when some boring stuff went haywire AND I still left on time and in enough time to pack Eli up for his camping trip this weekend. BTW, I am super jealous that Eli keeps camping so much and conversely I think he's really tired of camping.

Now I'm snuggled on the couch with Avery, drinking my redneck margarita, and the house is so so quiet (because I made everyone put on headphones, not because we're sweetly quaint.) I have big plans of absolutely nothing this weekend, maybe sprinkled with a potluck with friends if I can get the laundry in a manageable mountain. Tomorrow I want to write about how it's going with my intentional weekends/downtime, the epic budget tantrum I threw, and my new obsession with Fiestaware. For now though, I'm debating between starting a new book or catching up on Gray's Anatomy. Or maybe watching Handmaid's Tale though that might be too relevant and depressing right now. 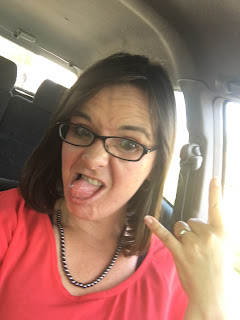 Sorry, but I love this. And you deserve a good weekend and new shoes.

I'm so happy you didn't get sprayed with doo doo!

Have you read "A Handmaids Tale" it still haunts me, because you know current politics and all. The show is suppose to be way more "potent" I am avoiding it. You are one of the most hilarious writers, I love your blog so much and am so glad you haven't quit it like the rest of us.