First Day of School! (and back to our overly scheduled programming)

And within hours, we were slamming face first back to reality. All three kids started school today, 7th, 3rd, and Kindergarten (!), which I was totally cool with until we left without any kids this morning. Suddenly all my "Three's great! I'm so over babies! Look at me with no diaper bag!" was feeling pretty old and dumb and needing a squishy little baby strapped to her chest ASAP.

However, the morning full of anxious energy would have been a lot harder to manage with an infant thrown into the mix. So there's that...

Eli started middle school today and he spent the morning frantically trying to memorize his schedule and the school map. Averson handled her stress the same way she always does, which is to say that she had a screaming fight with me about who should do her damn ponytail. Syd on the other hand, her only issue was that she kept trying to covertly roll her shorts up to make them shorter and hopefully get dress-coded on the first day back. C wisely knew that his nerves weren't going to help, so he stayed hidden until I pulled rank and forced everyone outside for pictures. 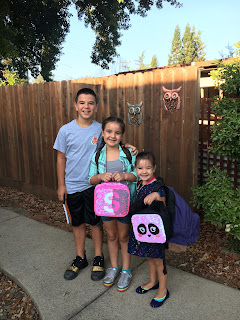 In the first of what appears to be the theme of trying to get everyone everywhere simultaneously, we dropped Eli off a couple minutes early. He didn't want to be walked in (or maybe didn't want to say he wanted walked in?) so we dropped him off on the sidewalk. Oof. I was totally fine until I saw him walk away, and then I worried for him clear until we picked him up. Would he get lost? Would he lose his lunch money? What if no one talked to him? What if the wrong kids talked to him? It was all for naught and he was totally fine. He made a few new (girl)friends, loved the pizza lunch, and helped other kids find their rooms. Thank God. 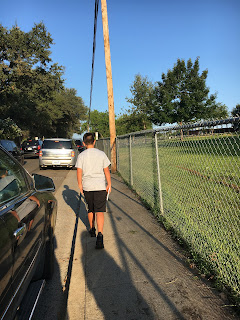 Then we screamed across town (not really, more like two miles) to drop the girls off. Syd was thrilled to be back to school and her only concern was that her teacher would be meaner than her second grade teacher, who I always compare to Ms. Honey from Matilda. Mary Poppins is meaner than she is. As soon as we got to the school, she was off with her friends telling them all about how she jumped into a volcano. Every time I tried to track her down for a picture she'd disappear again, so this is the best I got. 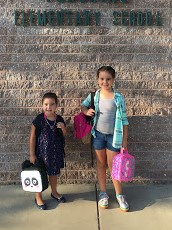 Averson was thrilled to be in school and to find her desk and meet her new friends. When her teacher started ushering parents out I told her it was time to go and she looked terrified. Thinking I'd misread her bravado, I immediately went into crisis mode but then she said, "But I don't want to go yet!" She was super relieved when I clarified that I was leaving and she wasn't. Then it was "Peace Out Mom!" I was trying to be open-minded about her class and some of the kids and all the first time parents (because let's be honest, I can be a touch judgy sometimes), but then some mom dropped off a screaming kid who NEVER STOPPED SCREAMING. Literally, at least fifteen minutes went by. We stood outside the door for a while catching up with other parents and he was STILL SCREAMING. Not crying, not whimpering, full on screaming. Finally the principal took him to her office thirty minutes after the bell rang. I was so grateful that I talked to Averson about how some kids might be sad or cry on the first day, but even she had a hard time hiding her WTF? face. At pick-up I heard that it never really got better, though Averson told me that he said a bad word at recess so I'm assuming he stopped screaming at least momentarily. I felt so terrible for the poor teacher that I snuck a can of purse wine and a pack of caramel M&Ms in a gift bag onto her desk. 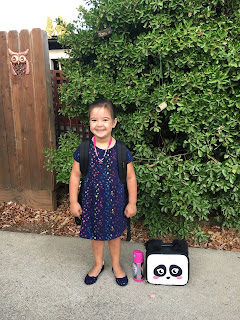 And now we're back to life. Four days a week we have multiple kids at multiple practices across three towns, with very little time in between. In two weeks, right about when we get the hang of it, I start a new  night class which will throw an awesome wrench into the mix. Ready? Set? Go!

PS: Any good dinner ideas for crazy frantic nights where some or all of us may be eating at a field or in a parking lot would be super-appreciated!

I love that the Jansports are still going strong and Averson now has her own. I went all Fjallraven Kraven for this year and my kids rebelled. So huge parenting points that they go with it. Also, your kids are awesome!

This post is hysterical. The screaming kid, Averson's WTF face, and leaving wine on the teacher's desk!!! Yes!!!! Amazing. You are awesome and your kids are awesome and I wish you were my neighbor so we could be judgy together.