I have been doing a lot of introspection lately and have come to the conclusion that I am a chronic over-scheduler. That's a topic for another post, but does provide context as to why I decided to schedule our only actual summer vacation to end 16 hours before the first day of school, and to go ahead and not cancel class the night we were coming home. Which is how I found myself driving five hours, flinging luggage out of the car into the driveway, speed-stripping out of my overalls, throwing on a random (and turns out too short) dress, and racing to my class to proctor the final exam. But you guys? It was SO WORTH IT. This vacation was amazing and I think I've discovered the secret to a successful Chiconky vacation. Very little agenda + outdoor activities + someplace with a kitchen and bedroom doors = AWESOMESAUCE

Right after my dad died, an amazing friend of ours offered to gift us his timeshare and let us pick the location. We looked at the locations and dates that worked for us, and when we saw that the Running Y Resort in Klamath Falls, OR was an option we snapped it up. The whole time we lived in Portland we tried to see Crater Lake National Park, and it never happened. This was our chance! We planned to leave a couple days early so we could meander north, stopping to fish (or in my case, watch my people fish while I tanned and read my book) along the way. Unfortunately, California went and caught fire EVERYWHERE so that plan wasn't quite so feasible, but we did take our time on the drive up and stopped at a couple of spots on the river. We spent one night in a hotel, cementing our resolve to never intentionally stay in a hotel again. Everyone is happier with a couch and a kitchen. The only restaurant open when we rolled in was Applebees and the kids were so excited that they asked to take a picture with the sign. 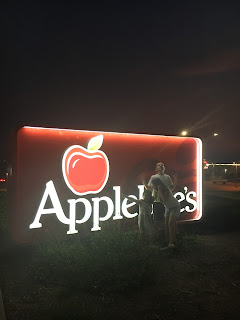 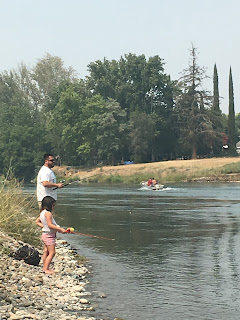 The next day we went to Lava Beds National Monument. I'd never heard of it before, but when I was researching things to do around Klamath Falls it came up and it looked both close enough and kind of cool, so we added it to the agenda. It turned out to be amazing! I seriously think it was my favorite day of the whole trip. The entire area is known for it's volcanic evidence, and Lava Beds is a series of lava tubes that you can explore. I'd never thought about lava tubes before and now I'm obsessed. One was closed because NASA WAS TESTING A ROVER IN IT. That's how cool they are! The kids did the junior ranger program (we LOVE the Junior Ranger programs) and learned both about the geology and about bats, which was also really fascinating. Side bonus: It was super smoky from all of the wildfires and nearing 100 degrees, so getting to hike underground was really quite pleasant. Pro-tip if you're in the area: If you go to Lava Beds first, you can buy an annual pass for both Lava Beds and Crater Lake for $45. 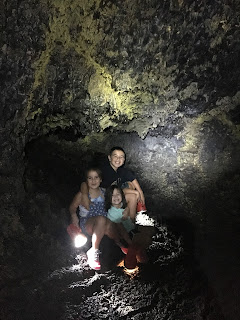 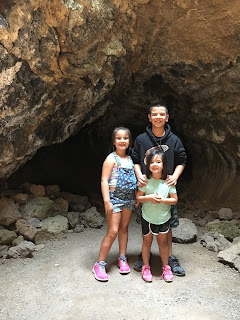 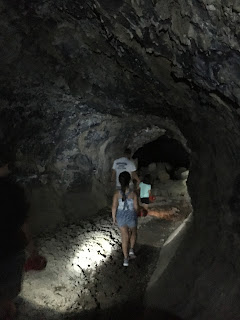 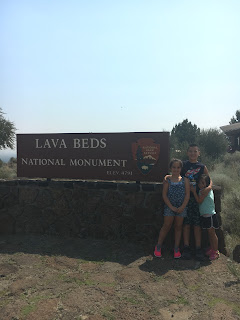 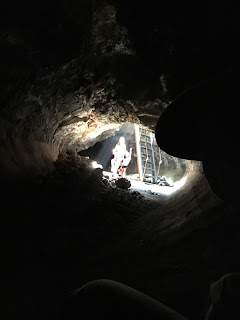 The next day was Crater Lake! The kids did the Junior Ranger Program again (much harder than others, BTW!) and attended a really cool Junior Ranger Activity that explained how the lake was created and earned them a patch in addition to their badges. Averson got to blow up the volcano and she's recreated it several times since. We had hoped to book the boat tour, but apparently because of the smoke they had canceled several so they were sold out by the time we got there. Instead, we took the (really, really steep) hike to the bottom so that we could swim in the lake. It's the only place where you can get in the water. It was definitely worth the hike and the freezing cold. Along the way we stopped at an overlook for a picnic. I felt like I was channeling my grandmother as I unpacked sandwiches from the cooler, moving fishing gear out of the way because we brought it "just in case." 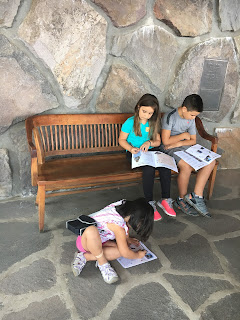 On our last day, we decided to try out the resort's mini-golf course. Spoiler alert: It was lame. It was a legit putting course, which is probably fun to hardcore golfers but was *less fun* for my crew. But we made it work with some creative rules and a loose adherence to typical golf etiquette. Then we decided to head back up to Lava Beds to try out a lake that they recommended. 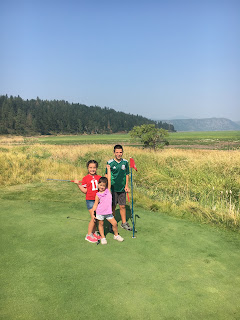 This vacation was exactly what I'd hoped. I was able to pretty much unplug and just hang out with my people (who are hilarious, BTW). My legs are tired from all the hiking and all of our new sneakers are filthy. Each kid did something outside their comfort zone and everyone is headed back to reality refreshed.

I'm so glad you had so much fun. We can't wait to do Crater Lake one day!!

This sounds like complete perfection. H would of jumped with Syd, H also would want E’s shirt..