My kid's amazing and I'm kind of a jerk

A few weeks after Eli started middle school, he came home talking about the assembly they had. The Vice Principal had suggested that kids could sign up to use their electives to help in certain classes, and Eli said he thought he might volunteer to help in the special needs class. A girl he knew helped in the classroom and pushed wheelchairs. Honestly, I figured he was either thinking about it to be around the girl or to get out of art class.

Fast forward a few weeks and Eli's stopped talking about the girl but he's still working in the classroom. During Back-to-School night I found out that the class he's been working in is specifically for kids with severe mental disabilities and behavior issues. Because I'm an awesome mom who thinks only the best of my sneuxflakes, I still figured this was either about a girl or getting out of art class.

Last week he offhandedly mentioned that they'd pulled him out of class to take his picture.

YOU GUYS. The teacher nominated him for Student of the Month. There is no girl and he's been spending his class period working on social skills with these kids. The whole class presented him with his certificate and each of the kids drew him a card. He showed me pictures that he took during the class and it was seriously the sweetest thing ever.

You guys? This kid drives me crazy but I think he's turning out to be a pretty awesome human. 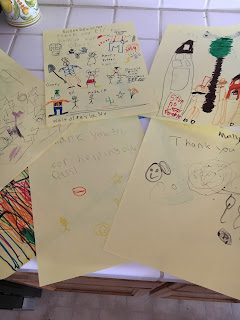 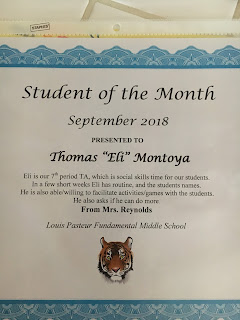 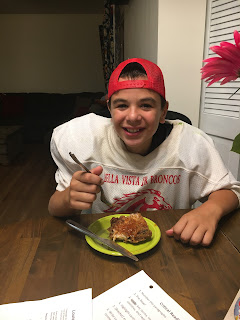 Good Job Eli!! And you are NOT a jerk!! Also if he didn't drive you crazy sometimes, I would think were truly crazy... LOL.
Kids are hard and can make us feel like jerks!

This boy's heart just melts mine. Too gentle and sensitive for his own good, but his new "students" are lucky to have him. So proud.

LOVE everything about this.