I keep threatening Eli that I'm going to buy and wear a shirt that has the title of this post bedazzled on it. They exist, and they must be easily purchased because every Saturday I am DEFINITELY in the minority of moms in crowded gyms not wearing them.
I'm not going to wear the shirt, but I realized that I haven't really memorialized this kid and his accomplishments lately. Wrestling season is officially over, which I thought meant we'd have our weekends free again to, I don't know, not perch in high school gyms waiting to run across campus in time to watch him wrestle for three minutes and then wait for another four hours. I shouldn't complain because it's actually the perfect sport for me to parent because I love waiting. My entire responsibility is to sit patiently, reading and mindlessly scrolling, and the cost is a brief three to five minutes of agonizing anxiety. Then I walk it off and get another couple hours to recover. Plus the snack bar food is not terrible. But I digress.
So we thought the season was over, and then Eli told us that his coach was holding off-season practices. Cool, sure, whatever. Then there were off-season tournaments. Okay... Guys. Off season wrestling is actually WAY busier than regular season. Eli has wrestled every weekend since the season ended. He's also working every tournament and helping coach the junior team, which he got Averson on to. And rather than be petulant about my loss of freedom like I want to be, I'm actually kind of loving it. He's so invested and he's also noticing that his coaches are recognizing his commitment. For a kid who really hasn't had to work hard for much, being recognized for your effort is a pretty big deal and a lesson I desperately wanted him to get. And he's killing it in these tournaments! Because it's club and not school, he's wrestling a lot of the same kids over and over, and it's fun to watch them strategize against each other. I don't know that I'll ever be able to comfortably watch a match, but I'm to the point where I'm not making a fool of myself anymore and that's progress. I gave myself a sticker for it. 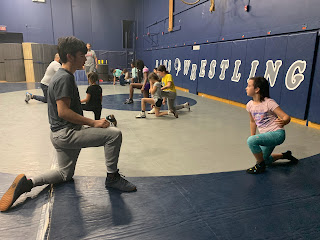 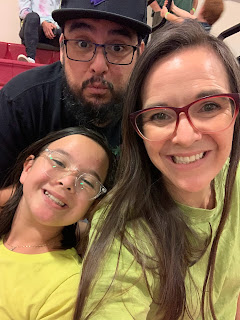 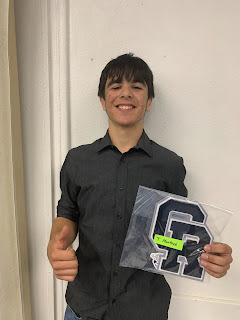 A kid and his varsity letter. Now we just have to get the jacket to go with it 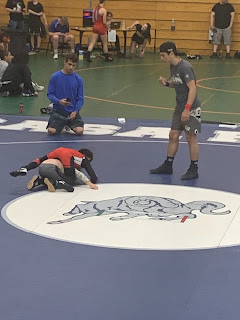 Refereeing tiny little wrestlers! I tried to find a picture from when he was that little but they're from the way-back-when of pictures not on my phone and it's a lot of work 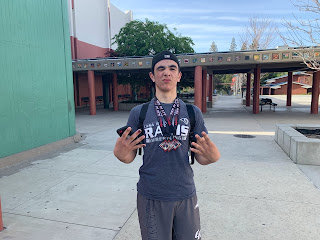 Some day I'll get a picture of my children not making weird faces, but today is not that day. But he's happy with his medals, despite the face he's making
Posted by Chiconky at 3:01 PM

aw, I love this! It must be so rewarding to watch your kid grow up and mentor others. Also, why are you waiting outside for 4 hrs in between?!