In second grade our school does a Poetry Night where the wear black berets, we all sip lukewarm coffee, and the kids recite poems they've memorized. It was one of the few things that bummed me out about Averson being virtual last year because it's both adorable AND tolerable, a rare mix in the world of elementary school performances. So I was absolutely thrilled when I realized that they'd decided to combine the 2nd and 3rd grade classes this year, meaning that she'd get a chance to perch upon the stool after all!
She was so sweet and so earnest and so, so nervous. It's a big deal to the kids that the parents don't know their poems in advance, so all we knew was that she had a two person poem and a poem that she'd written, and that she was nervous that she'd forget her lines. The night before the performance she nearly gave herself an ulcer second-guessing her preparation, given that she'd only performed in front of other students and now she'd have to perform in front of ADULTS. What if she didn't make eye contact? What if she froze? She was so sweet and so excited and I was only a teensy bit worried for her.
She totally nailed it. Her poem for two voices "House Crickets" by Paul Fleishman, was adorable and her own poem about Christmas was sweet (even the part about being scolded for being too loud). We all did jazz hands instead of the art house snap which I didn't totally understand and there wasn't any coffee, but it was perfect nonetheless. 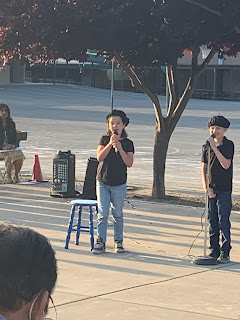 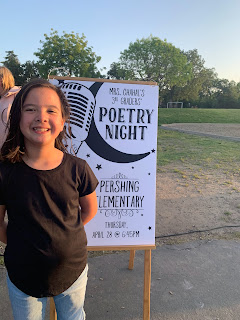 Oh, that sounds so darling! Her smile at the end says it all. (Off to look up her first poem now.)