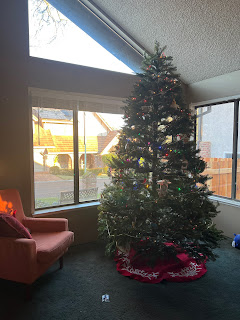 After last weekend's hydrological event, I've decided to be done with my holiday decorations. I've been pulling things out bit by bit when I had a little time, but honestly, it all felt a bit overwhelming and I think this year has been notable for my significantly reduced tolerance for being overwhelmed. It's funny, because I've been trading pictures with my sister, a self-proclaimed Grinch, whose house now looks like Buddy the Elf came through in a manic state. I'm pretty sure she has lights up in her bathrooms even. I thought I was feeling bad about what seemed like half-assing it, but actually, it feels kind of perfect. I'm resisting the urge to purge what's left in the Christmas bins (sometimes out loud) but this feels like enough. 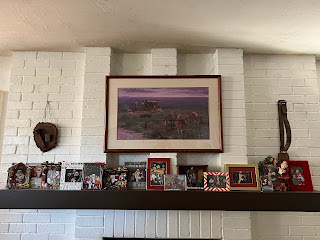 My absolute favorite. Santa pictures is on the list for Holiday Festivities That Will Not Be Skipped. 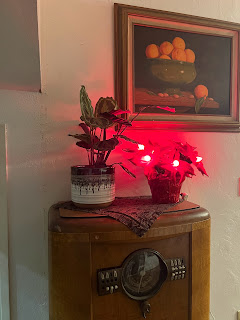 My mother's electric poinsetta. My grandma made these for her kids long before I was born and I have coveted this insane fire hazard for my entire life. I was very fair about a lot of things but I'm not ashamed to say that I secreted it out of the house after she died. The base is concrete, the wiring is exposed, and the pipe cleaner leaves were probably purchased at an actual tobacco shop for actual pipes. I don't leave it plugged in (because I value my home and would prefer not to burn it down) but I do light it up on occasion to revel in all it's glory. 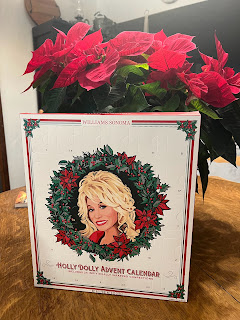 C bought me the ridiculous Dolly Parton Advent Calendar from Williams Sonoma. And the actual non-electric poinsetta is from the plant-of-the-month club he signed me up for for my birthday. He's kind of killing the thoughtful gifts this year. 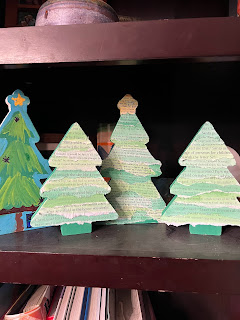 This year's craft. So easy and it was a nice entrance to the holidays. 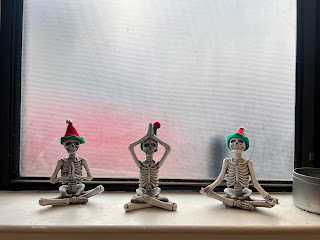 And these guys. They bring me a lot of joy. I forgot to put them away when I put away the half-assed Halloween decorations. So now they're my festive Christmas yoga skeletons.
Posted by Chiconky at 8:07 AM

I also have a reduced tolerance for being overwhelmed! I did NOT [pitch my unused stuff this year, but I will if it doesn't come out next year. LOVE the poinsettia and the yoga skelatons are perfect. Also, you have the very best tree spot in your house!!

Those craft trees look lovely as does the rest of your dec.