A good friend and I have decided that we want to run a half-marathon together, and so I'm back to doing C25K in hopes of not dying (Incidentally, according to my app I do C25K every year in May and June. And yet...) This year C and Eli are running the program as well. We're a veritable family of fitness these days. So when our local library/zoo/etc put on a 5K and Kids run we thought it would be a fun way to spend a day.

After I saw Eli covering his ears I decided to at least start the race with him. As soon as the starting gun went off though, he was out of there. I was sprinting and couldn't keep up with him.
He was in the second heat, 30 seconds after the 8+ year olds, and he STILL came in about 12th. The kid was like lightening! 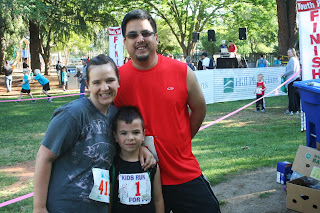 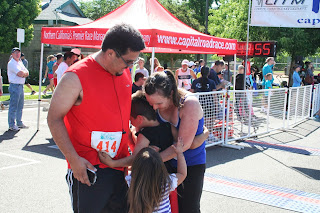 I am really glad that C and I did it, and the experience as a whole was really, really fun. However, I learned a few things along the way.
1.  C and I should run the same races, but not necessarily together. That man is FAST. There was no way I was keeping up. And if he kept my pace he was leisurely walking, which just pissed me off. So we've agreed in the future to meet at the finish line and share an orange slice.
2. I am my own very worst critic. I finished this race so mad at myself because I walked parts of it. Which is ridiculous (logically, given that I had a baby three months ago and started running again less than two months ago) but it still took me a couple hours to get over my frustration.
3. This is something we should all do more often. I was so incredibly proud of Eli (and C and myself) for getting out there and trying something new. And it was SO FUN. Racers are so nice and supportive, and afterwards there were booths. I love swag like a crazy woman loves cats.
I think we're going to try to do these pretty regularly, or as often as we can afford. And I absolutely can't wait for the half-marathon! It's in January, and I bought a treadmill, so expect lots more running posts.

I cam barely do the old lady kettlebell workout in Real Simple-- I am super impressed.