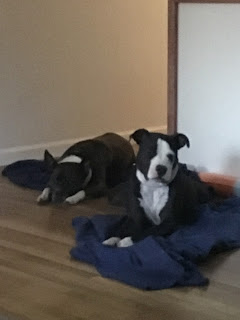 I pretend that I don't like the hounds because, well because a girl only has so much patience to go around and after the inmates and the kids and the adulting I don't want to spend much of it on someone who shits out underwear. But the fact is that I do sort of kind of like them. Even if they're heathens (much like the rest of the family.) The two of them together though is A. FUCKING. LOT. They run for about 15 hours a day. We try to walk them and it's all fine and Andy Griffith until they see another dog and turn into snarling lunging assholes, which in turn makes us look like assholes. Scout keeps digging epic holes in my yard and Atticus acts like we don't know he sleeps on the couch.


When we got Scout, one of the deals that came with the "free dog to good home" package was a discounted obedience class run by a local pitbull advocacy group. It took me months to get into one, but finally we got in. I've never done dog training so I was really interested to see what it was about. I had high hopes for the Stepford dog of my dreams.

The first class was "humans only" and we spent TWO HOURS sitting under an overpass getting schooled on all things pitbull. TWO HOURS.  I bet we spent twenty full minutes on red nose vs blue nose (*spoiler* there is no difference!) These people have great intentions but they are a lot. Also, everyone went around the circle talking about their sweet giant "lovebug" who "just needs some manners" or "gets a little worried around other dogs" or "can't be let out of the crate because he keeps trying to kill our other pets." That last one was met with understanding smiles and murmers of "Oh yeah. I have one of those too."  Uh uh. Nope. Not me. All of the sudden Scout was sounding like a purse dog in comparison to these crazy animals.

The next week I pulled up bright eyed and bushy tailed with my required bag of meat treats (that I lovingly cooked from scratch because "dogs don't respond to regular treats"), two collars (one prong, one regular), a harness, and a special European training leash. And the Hellbeast, who doesn't get to go out much because she's a jerk (but not the eating pets kind of jerk.) Before we unloaded I said I silent prayer that neither of us would die that day. 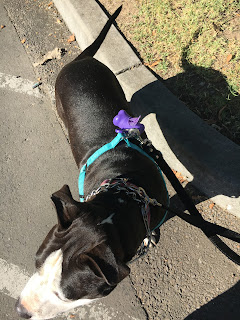 So picture this. An overpass, covered in philosophical graffitti like "Let's fuck" and "Get bent" and homeless camp leftovers (shit you not.) A circle of big crazy pitbulls all trying to "say hello" (or as I like to call it, "rip out each others throats.") There's one very sweet teenager with the daintiest little dog I've ever seen, and next to her is this enormous man with a matching enormous pit who apparently doesn't even respond to meat and just slurps out of a water bottle the whole time. There's a sweet older lady with a CRAZY dog that snarls  and lunges at Scout every time we come near her or her stuff (because she's got a full set up including a throw rug). And of course right next to me is the lady who has her shit all figured out, with her giant well behaved dog that she just got three weeks ago. There's the couple across the way that move in tandem and keep dropping their leash even though rule #1 of pit class is "Don't ever, ever, ever drop the leash." I'm surveying the situation when I realize that I've got a freezer bag full of delicious taco meat strapped to my waist and all of these dogs missed breakfast ("so they'll be super focused.")

Really it's not terrible, as long as you don't mind being referred to by your dog's name and you don't mind the din. We're learning all sorts of useful tricks like how to focus, sit, come, and how to walk without yanking my arm out the socket. And other less useful things like staying when I take a step back, walking a figure eight, and how to keep lunging at the dickhead dog who keeps barking at you even when there is delicious oily meat in your face. Also, she still can't take a decent selfie and it's starting to be a problem. 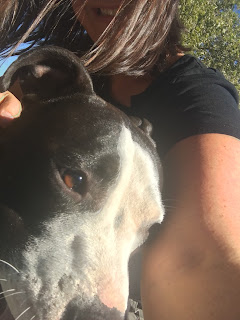 So, good news is that we didn't die. And I get to spend the next several weekend mornings under an overpass, trying to both teach my dog "Focus," not get stabbed with a hypodermic, and not get mauled.  But you bet your ass I'm not dropping the leash. 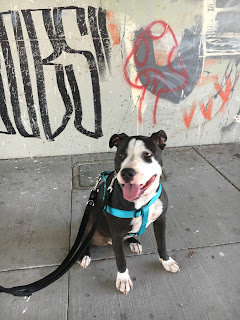 OMG...I was laughing so hard reading this that I started crying! Too funny but sort-of-seriously sounds like an accident waiting to happen. I know it's free, but I'm a little worried for you and Scout. That's quite a few weekends to keep "betting against the odds" so to speak (or rather, betting that one of the other "owners" don't fall to their own idiocy).

We had a shepherd/husky mix we got from a rescue organization several years ago who also came with some personality quirks we learned to lived with/adapt to, one of which was random digging. He didn't ever dig by the fence line (probably because he was too busy trying to get at the neighbor's yapping boston terrier on the other side), but the holes were deep enough that he made it through the top soil layer down to the clay. I found that filling the holes with playground sand got him to eventually stop. Not sure why...Maybe it was the texture difference, but once the area was sanded (yep, I went there) and the hole was filled with beach he left it alone.

Now it was kind of a pain in the a$$ that he occasionally brought beach in with him, but it was SO MUCH BETTER than the mud he used to track in (especially after a rain). Just an idea of something that worked for us (that was fairly inexpensive).