My thoughts on "Me Too" 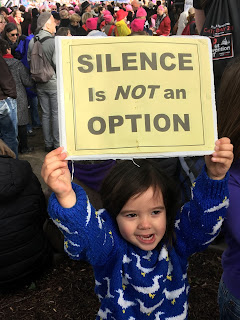 Unless you’ve been in the backwoods or under a rock, you’ve seen the flooding of “Me too” messages all over social media. The idea is that if every woman who’s ever been sexually harassed or assaulted posts “Me too” that the magnitude of the issue will become obvious. I hesitated when I first saw it, but after some introspection I added mine in as well. I saw all of these women that I admire, respect, and love putting their “me too” out there and I wanted to join my voice in solidarity. As more and more affirmations flooded my feeds, what I (and most women) know became glaringly obvious. One of my friends said it best when she said, “It’s not a matter of ‘if’. It’s really just when and how many times.” That’s the thing. I don’t think that there is a single woman out there, and probably not many girls, who have not been sexually assaulted, harassed, or objectified. Not. A. Single. One.

After the initial flood of "me too"s came the editorials. Shouldn’t the men be posting “I did”?  Why are we again putting the onus on the victims to change the culture? What is the purpose of posting “me too?” Are we supporting each other or revictimizing each other? Are we actually expecting that someone out in the inter-land actually didn’t realize this happens? All really good questions. I was talking to C, and I was explaining to him that the frustrating part isn’t that so many women have experienced this (that's more enraging than frustrating), it’s that we all know it happens and nobody seems to care. We live in a society where we would rather an egotistical, racist, masochistic toddler hold the keys to the kingdom than anyone with a vagina, a law degree, and years of qualifying experience. But I digress.

It has become trite, a knee jerk post as tragedy after tragedy after tragedy happens, but I do love the quote from Mr. Rogers about finding the helpers. And I think maybe that’s the missing part of the triad. We know there are victims and we know there are perpetrators.  I think maybe what this movement needs is to glorify the allies. The people who have stood beside us in our lives and affirmed that we did not deserve the way we were treated. That we do not imply consent by our gender. That we should be able to walk down the street without comment, that we should be able to be in a man’s presence without the expectation of sex, that we should be able to work without having to concern ourselves about the most professional method of thwarting unwanted advances. Let's make it fucking awesome to stand up for each other.

So here it goes:
I was 15 when a regular at the restaurant where I worked would corner me behind the counter, make lewd comments, and laugh at my discomfort. Then he’d ask when we were ever going to go on our date. He did this almost every day, waiting until his wife went to the restroom or out to the car. My boss was always there and joked with the customer about “his girls.”  I sheepishly told my high school teacher. Without hesitating, he advised me to start documenting what was happening. He gave me the words to use with my supervisor. And when my boss said, “He’s been coming here longer than you’ve been working here” he gave me the legal words to use. He validated my experience, empowered me to stand up for myself and supported me through the process.

I was 18 and had just had to physically fight my way out of an ex-boyfriend’s house because he said I needed to “just stay one more night.” I stood, shaken and crying, under the fluorescent lights of the gas station ashamed, scared, and embarrassed. An old friend from elementary school just happened to drive up and when he asked, “How are you?” the words just came flooding out. He didn’t try to be my knight in shining armor. He didn’t try to make the moment about him or his own rage. He didn’t judge or belittle me. He didn’t try to make it his “in.”  He only said, “I’m sorry and I’m glad you’re safe. Can I do anything for you?” That meant the world to me in that moment. I drove into that gas station feeling stupid for putting myself in that situation and  I left feeling angry but also like I had done what I needed to to protected myself.

There was the random guy at the hotel I was working at who, instead of egging his friend on, steered him away and said, “Man, leave her alone. She’s not interested.” The woman on the street who walked next to me when I was being followed by a stranger who thought I should smile for him. The teenager on the train who called out the man who kept “accidentally” bumping into me.There are probably at least fifty more times that I could come up with where someone spoke out to say, “That’s not how we treat people.”

I didn’t NEED any of those people to stand up for me. In the beginning, I had to learn that I shouldn’t expect to be treated first as an object, then as a woman, and lastly as a person. Once I got there, I became perfectly capable and willing to tell people off. What these helpers did though is send a clear message that the actions they were seeing were not acceptable. They inspired me to do the same, to stop being complacent and offer help when it's needed. Because that’s what we need in this. We need for people to see that it’s happening, and say something.

Let’s take the shame out of it. We all know that this is not a rare occurrence. “Me too” is obvious. It shouldn’t be up to us to wear the badge of honor so that others can talk about how brave we are, or how terrible they feel for us. It’s easy to see us as brave and to feel terrible from afar or when the moment has passed. But let’s laud the people who are there with us and speak up. Let’s celebrate the helpers. If you recognize yourself in any of my stories, thank you. For every friend who reminded me “they wouldn’t say/do/be that with a man.” For every time my husband has reminded people that I’m perfectly capable of making decisions despite my pesky uterus. For every co-worker who has corrected someone who called me “Ms.” or “Mrs.” Instead of “Dr.” when I’m not around. For every time Megan Trainor or Katy Perry has my girls singing about their power. Thank you. Change comes when we stay loud. So let's keep saying, "Me too" but let's also say, "No more."

this is very powerful. thanks