It was actually a pretty productive weekend 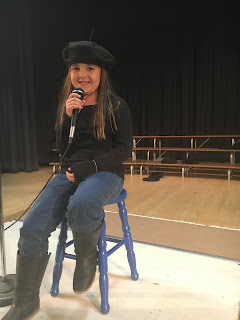 I know it's not technically the weekend, but we're staring on Thursday because I feel like that's when we really got going. Thursday night Syd had her annual class performance and it was so sweet that I couldn't even whole-heartedly snark about it. All the kids in her class have been memorizing poetry and they capped it off with a "Poetry Cafe" complete with donated coffee that I sold my next child for. Sydney has been so excited about this night. All the kids were under strict instructions not to perform for their parents before the big night, so we had no idea what we were looking at. Syd's poem was WAY longer than I'd expected, and she did a great job! It was totally worth sitting through 20 other kids and their poems. My favorite part was when the kids all knew the punchline was coming and they started giggling ahead of time. Also, they all wore black, the teacher supplied berets, and everyone snapped instead of clapped. Totes adorbs. C and I both had multiple cups of coffee though (for as hard as I worked for it, it wasn't going to waste!), which meant that Thursday was a VERY long night. 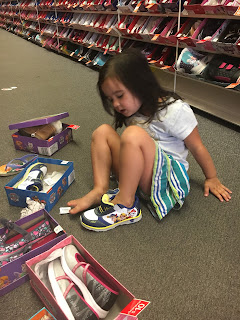 Averson had to miss preschool on Friday because she nor C could find any shoes that complied with the closed-toe dress code. Seriously. Coincidentally, I had gotten a coupon for Payless that same morning, so after work on Friday Stinky and I went shopping. She couldn't believe I was letting her pick any shoes she wanted, including the light-up Paw Patrol ones. Sometimes there are perks to being the third kid. Mom is solidly out of fucks to give about the small shit like light-up shoes and licensed apparel. She actually didn't choose the most horrendous options and she skipped out of the store with two new pairs of school-appropriate shoes. I skipped out with an adorable pair of $10 pumps and a four-year-old who learned the meaning of "bad influence." Then I found her old shoes in the washing machine.

Saturday started with my WW meeting (where I lost NO weight at all. Like not even an ounce. WTF?) and then all the soccers. C was double booked so I had to pinch-hit at Averson's and it was a shit show. I slammed her fingers in the car door when we got to the field, and that was probably the highlight. I am WAY too competitive for a U6 team, especially when the team is made up of very uninterested kids who run faster for the water breaks than any other time. Plus the other coach offered to have "all the girls play on this field so that your kids have a chance to get some touches in" and I had to use a lot of energy and patience to not go off. So I think I should be forgiven for physically removing a screaming Averson off the field and hissing through my teeth "Pull it together!" She was mad because I insinuated that she was short and that I told another kid they were fast. MY. BAD. Then we went to a community garage sale. I scored a new (to me) Girl Scout bag for all my patches because I'm edgy AF. I also got a terrible case of the envies in all these neighborhoods where neighbors weren't getting raided and people were getting rid of stuff instead of collecting it, so I came home in a snit about my house with all of it's giant, dirty dogs and kids and crap. I looked for houses in cute neighborhoods, put a few things up for sale on FB, threw some crap away, and then ran out of steam. I hate garage sales and I also hate having so much stuff, so I think at some point I'm going to have to grit my teeth and donate this crap. Actually, as I was typing this I just realized that I should schedule a donation pick-up, so I don't have to move it a bunch of times. 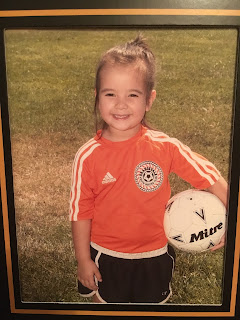 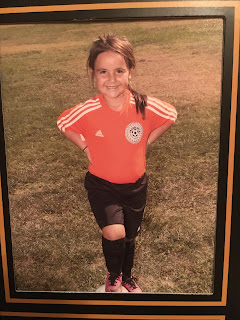 Soccer pictures are still adorable though. Can you tell Syd did her own hair? 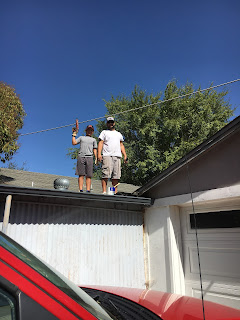 This is a picture of Eli and C on the neighbor's roof. She mentioned to C earlier this week that it was leaking and so today he wrangled the boy and they spent the morning up there doing roof things. I'm not sure what exactly, but there was tar and a gully involved. Eli was paid in soda and pizza and he hasn't stopped talking about how great it was. <3 and="" are="" end="" fixing.="" hence="" lovely.="" nbsp="" neighbors="" of="" on="" other="" p="" quite="" raidtheneigbors="" roof="" spectrum="" the="" these="">

The girls and I meal prepped (make these, they're amazing!) and then volunteered for a couple hours for a friend who is putting on a charity gala in a couple weeks. Then I came home and folded Mount Laundry while I watched the season premier of This Is Us and tried not to cry. I finished My Grandmother Asked Me To Tell You She's Sorry and it was so, so good. I've got 13 Reasons Why cued up and then a huge pile of library holds that I have to plow through in the next three weeks. I'm really hoping it rains soon. You know you're on a reading roll when you're hoping for crappy weather or a head cold so you can sit on the couch all day.

Next week is much of the same. I put off meal planning so I've got to come up with what I'm going to feed the heathens. I'm trying to make food I can eat and stay within my points without being super obvious about it, which is making meal planning a bit more difficult. Though I had tacos in a red pepper "shell" last week and it was a game changer. Oh! And a friend sold me tickets to a Kings game SUPER cheap, so we're doing that tomorrow. Nothing says POTY like taking your elementary school kids out to a late game on a school night. I predict there will be no whining, I will spend a reasonable amount of money, and Tuesday morning will be full of laughter and gratitude.