Firstly, if you haven't read Michelle Obama's Becoming, go do that. Like, as soon as possible. I love this book so much that I waited a year for it from the library, read it, then promptly purchased my own copy from Costco. I think we've established that I am not a fan of the memoir, but OMG. This one is so good. I think maybe because it reads slightly differently? Like there was a message that the author wanted to send, and used her own experience illustratively instead of using the book as a way to memorialize her story? Does that make sense? Long story short, it didn't make me hate anyone and didn't read as particularly self-aggrandizing. There are so many moments in the book that I could relate to, and the way she writes them is so casual but also so beautiful. I love a beautiful sentence and man, this book is full of them.  The way she describes people, especially her friends, is particularly amazing. As I was reading, I texted a friend and said, "I just want someone to see me in a way that they can describe me like this." She has so much respect for strong, powerful, caring women. And then there's how she talks about family life and all of the sudden, she could be in my brain. There's a whole thing about trying to find the perfect winter hats for her daughters to wear when Barack announced his run for president and it was like, "Let me sing you the song of our [neurotic, trying to hold it together moms] people." I don't know that I've heard a truer story than funneling all of your fears, anxiety, and excitements into a single damn hat that (spoiler alert) your child will then refuse to wear. Someday I'll tell you the story of the matching raincoats.

If you can't tell, I LOVED the book. It left me feeling connected and optimistic, and also inspired to maybe shake myself out of this mid-life/existential crisis that I seem to be perpetually circling. She trained at the top schools to be a lawyer, got a great paying job at a prestigious firm, and then decided that maybe she didn't really want to be a lawyer after all. But she also talks about the pragmatic parts, like "Hey. The law pays a helluva lot better than community service and I have all these pesky loans now."

Okay, so the book is amazing and I loved it. Now's where story gets REALLY good. The day that I finally got it from the library (a full year after I put it on hold), I randomly texted my friend from Minnesota. C and I were talking about her and I thought I'd check in, seeing as how I was stuck at a wrestling tournament being ignored by my tween for the next ten hours. She wrote back and we caught up a bit, and then she said, "Hey! Do you want to go see Michelle Obama with me?" I laughed and was like, "Wouldn't that be amazing?!" Nope. She was serious!! Her husband had bought them tickets as her Christmas gift and then couldn't go. If I could get myself to Minneapolis she wanted to take me as her +1. Some frantic work negotiations, a few frenzied conversations with C about how, yes, I was going to be gone for a week for work, then turn around and fly to Minneapolis and really, you're really okay with this? and about half of our accumulated frequent flier points, and I was headed to the Twin Cities to see an old friend and attend the Michelle Obama Book Tour! 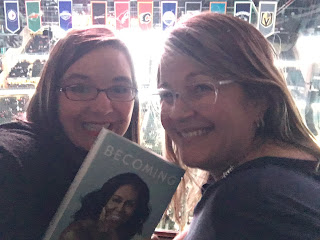 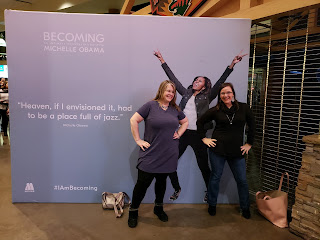 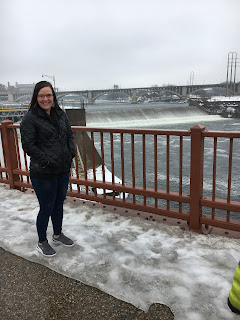 She was amazing. So funny and thoughtful and genuine. I really was worried that she would sound canned, or that her voice wouldn't match her writing (suggesting that she'd had ghost writers) but I was pleasantly surprised. Even in a sold out stadium, she was authentic and personable. The two hours flew by. I wanted so badly to take notes because I'm a huge geek, but I was really trying to just enjoy it. So now I'm left with what really stuck for me. I think I've boiled it down to three major themes.
1) We all need to make a better effort to advocate and show up for kids. Not just ours, but all of them. So much of her story is about how people advocated for her and made her believe she was unstoppable.
2) Each of us needs to find our own voice, and then use it. I bought the shirt (of course I did) that said, "Find your fire and keep it lit." I take that to mean, remember what inspires you. See above re my mid-life/existential crisis.
3) We're all a lot more the same than we are different. Someone asked her if she still worried that people wouldn't see themselves in her story, and her answer was that she was heartened because SO MANY people seem to see themselves in her story. Which means we can all relate to each other's stories too.

And then there was a lot about motherhood, and wifehood (wifeness?, marriage? you know what I mean). She's honest about the fact that she had to take a back seat in her relationship, and how she struggled through that. She obviously loves her husband, but she also makes fun of him and talks about how she had to take ownership for her own happiness. She talks about getting to know her girls as individuals, and about how much of her time in the spotlight was spent making sure that they got a normal life. Even if that meant the Presidential motorcade showing up for parent-teacher conferences or having friends' houses swept for bombs so she could bring pie to a potluck.

Also, and I'm not sure I've talked about this, but C and I have decided that our word for 2019 is "Invest." We take that to mean that we want our decisions, financial and otherwise, to be intentional and to positively impact our future in some ways. Invest in getting the kids outside their comfort zones. Invest in making sure Eli has the scaffolding he needs before he heads to high school. Invest in making our house a home. Invest in making our relationship stronger. You get the point. And Michelle Obama used the word over and over as she spoke. It was a cool intersection between someone I find inspiring, and the intention that I've set for myself this year.

And my visit with my friend Amanda was amazing too. I got to her house and she immediately hugged me, then made me change into gym clothes to take me to a dance class. The next day, we had donuts with her kids, then went to an hour long squat-fest at the gym that left my legs shaky and my language decidedly not kid-friendly. The day I left, she made sure we squeezed in a Zumba class so that I was good and tired, and confident in my decision to not pursue professional dance, before I got on the plane for a long trip home. Between gym trips, we talked (a lot), met up with her awesome friends, and hung out together. It was a great mid-week vacation and I'm so so grateful for it. And I'm hoping to hold on to some of this inspiration. There are so many things that I optimistically wanted to do with my life, my career, etc. and I don't want to lose sight of that. I'm in a place where I'm considering what kind of impact I want to be having, and hearing her story reminds me that I don't necessarily have to stay with what I know, but also that it's okay to keep that whole pesky "support your family" thing in mind too.
Posted by Chiconky at 11:44 AM

I'm Amanda's little sister and arguably her best fan. I LOVE your description of what you experienced with Michelle, and how you clarified why I liked her book: it was a connecting story that had a greater purpose. I've been disappointed by quite a few autobiographies, but I couldn't put hers down. I'm so glad you got to be there with Amanda, and her kids, and Trixie and Katie. So glad. The existential crisis feels so real, but when I get down to my real life, I love it. Thanks for sharing.