Over it. Get vaccinated. 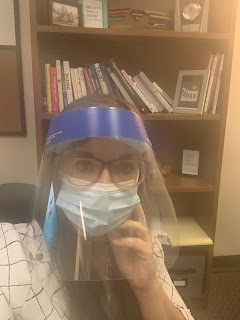 This is what I look like when I'm meeting with patients today. They've reinstated the stricter PPE guidelines at work, given the recent resurgence of COVID cases and the fact that the hospital is back to nearing capacity. Not only do I have to wear my mask, but now I also have to wear a face shield or goggles. Can't you just feel the empathy? My first patient was visibly taken aback when he walked into the room, which is exactly what I'm going for when setting the tone for a session.
I'm over it. I sit with struggling people and have to try to connect with them at their most vulnerable while wearing this bullshit. And that's best case scenario. Imagine if you were feeling paranoid, or scared, or suspicious, and this is what your psychologist looked like. Imagine that you and your kid had to talk about suicide and safety plans with someone and they literally have a barrier between you and them. And that's just at work. I'm over wearing masks period. I'm over the kids having to wear them everywhere and constantly running the risk analysis game about EVERY SINGLE FUCKING DECISION. I'm not languishing. I'm pissed off.
Up to this point, I have encouraged friends to get vaccinated, but I've also tried very hard to mind my own business and let people make their own decisions. I've long been of the opinion that if it doesn't affect me and it doesn't hurt other people, it's really not my business. We protected ourselves and made the best choices day to day (to the point of fucking exhaustion, if I'm honest). I'm done. The decision to not protect yourself is affecting me now. It's affecting me, and it's hurting people. We have lived in the pandemic for a year and a half and now we're going back to where we were in March of 2020. It's bullshit. There's really no better way to say it.
I am trying to understand the anti-vaxx position. I really am. I spent the weekend arguing with the only person left on my FB that is anti-vaxx, hoping to glean some information that would help me understand why they are so adamantly against something that to me seems abundantly clear. I'm going to be honest. What I've gleaned is that it seems to be rooted in egocentrism and selfishness. There is a huge anti-mask movement here since it was declared that the kids all have to mask in school, and the mask mandate has been reinstituted to include vaccinated people. Instead of choosing not to send their kids to school, the anti-vaxxers seem to want to lament about their loss of freedoms and the injustice of making little Timmy cover his mouth. If anyone has information that would help me see how reasonable humans could end up on the anti side of this argument, I truly and genuinely would be interested. Because I don't get it and all that anyone's been able to show me are memes, youtube videos, and snippets of articles taken out of context.
The sad thing is, I've seen this scenario play out on social media so many times that it's become frustratingly predictable.
"Everyone can make their own choices! I refuse to live in fear. It's no worse than the flu!"
"Ugh. So over the masks. Tried to run into the store real quick and the cashier gave me such a hard time about it! If your mask works, you're fine. Right? Some of us can't wear a mask all the time. Where's my rights?"
"Sheeple! I encourage you to do your research and watch insert some rando video of someone spouting quasi-science"
"Well, it happened. We've tested positive for the 'dreaded virus.' We think we likely caught it at huge gathering of like minded people not living in fear. So far we're doing okay! Just a little tired. So grateful for our community right now! Lots of rest and fluids. Thank you for those of you that have come by!"
"Wow! This thing is no joke! Hopefully we're seeing the worst of it."
"The doctor is a little worried because my oxygen level is still low. Thank you for all the recommendations. So far I'm feeling okay and taking it easy."
"Heading to the ER. Oxygen levels are still really low and it looks like we might need to get admitted."
"Update: So-and-so was admitted to the ICU. Nurse says they're doing better and in good spirits. Hopefully they'll be home soon!"
"Update: I just talked to the nurse. The oxygen levels are still low. She said they've been awake for a few minutes but mostly unconscious. Send all your thoughts and prayers."
Get vaccinated if you're eligible. I watched the first half of the pandemic (son of a bitch, why does that seem like the most accurate way to explain time right now?) rage through the prisons and now I get to watch the second half from the perspective of community health care. The vaccines work. I've seen them work. I've seen families where a kid gets COVID and the vaccinated parents don't. I've seen relatively healthy, unvaccinated people have really, really bad reactions to the virus. Being healthy and strong doesn't always mean safe.
Posted by Chiconky at 1:09 PM

This is how I feel. I’m now angry. I’m doing my part as is my family. I just can’t anymore. Long time reader here first time to comment. You summed up my feelings in this post.