I took boudior pictures and you should too

Back in February I got a wild hair that I wanted to do boudoir pictures. As is my style, I had a thought and then had fully booked and paid for a session within the span of about 6 hours, and then promptly freaked out about all the things. The nice part about being impulsive though is that I'd booked it inside the non-cancellable window, so it was happening whether I liked it or not. If you're considering getting naked in front a stranger and then documenting the process and you think you might be a little uncomfortable with that, I highly recommend my strategy.
I have been working really hard and I feel more confident about my body than I ever have before, but I still thought my lifelong love/hate, mostly hate relationship would come out in full force either during the session or when I saw my pictures. I was really, really worried about it. Like, she sent a survey that asked about any concerns and I replied, "I'm afraid I'll cry."  It's wasn't an unfounded concern. I've spent so much of my life focused on all the ways I thought I was falling short that I worried that something like this would set me back. I worried that my flaws would ruin it.  I so desperately wanted this experience and I was so, so nervous that I would somehow screw it up. I was certain that I was setting myself up for disappointment. You know that feeling, where you want something so badly that you worry that there's no way it's going to live up to what you're hoping? That's where I was.
Spoiler alert: I definitely didn't cry. If anything I think this experience may have resolved what I'm starting to realize was body dysmorphia once and for all. In fact, I'm having to consciously restrain myself from inappropriately showing the pictures to people who definitely don't need to see me in my underthings (and less.) I can't wait to do it again. I think everyone should do it. I wish I'd done it sooner.
Y'all. I think this was one of the best, most awesome things I have ever done in my entire life. It was so fun to be pampered and to feel opulent for the day. I purposely chose a higher end photographer because she included hair/make-up/wardrobe/studio. I literally showed up and that was it. The lead up was nerve wracking but the day of was that awesome feeling of "Fuck it. We're doing this." and being able to lean in fully without worrying about whether I was doing it right was really nice. The make-up artist made me look like me, just fancier (lashes!) and then the photographer walked me through everything so I didn't feel at all awkward or weird like "I don't know what to do with my hands"
C, as you might guess, is also thrilled that I did it, and he was super supportive when I floated the idea, but I genuinely did not do it for him (though his response was a nice bonus). In fact, I think even if I didn't get pictures it would have been worth it just for the experience. There is something so powerful about doing something that makes you nervous with positive results, and being able to see yourself in a new way. I look at these pictures and I absolutely feel beautiful, but I also feel proud, independent, and powerful. Not really things that are typically triggered in the day to day monotony of making a living and raising kids and holding down the fort. I think there's something really profound in the act of literally stripping down, getting away from all the trappings and labels. It's intense and honestly, it's pretty magical. 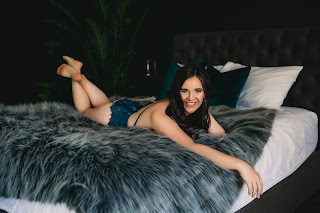 If you’re in Northern California, I cannot recommend Colleen highly enough. She’s awesome  and I think she would’ve made the day incredible even if I had cried
Posted by Chiconky at 8:50 AM

Oh, you look *absolutely* lovely and happy and I'm so glad it made you feel that way inside too.

(You've probably seen that Dove Evolution commercial and how it practically takes a village to make models billboard ready. From my own small time forays in modeling, I remember how feeling important and having tons of people fuss over me while pattering on about how I looked made me feel camera worthy. So there is something to that.) https://www.youtube.com/watch?v=KN2yunRynks

Also two more things (and I was thinking about this at commencement yesterday, so you know your post was super impactful-ha). You look super cute and recognizably like yourself. And--if you have the time and energy for it--there might be lots of opportunities for modeling in your town.

You look great! Glad the experience turned out to be all you hoped it would be and more.