Averson is really, really into Greek mythology these days. When we went to Hawaii she was fascinated by the stories that our guide told us about the various constellations, and loved the legends of the islands. Then she started reading Percy Jackson and her librarian held a new copy of Percy Jackson Greek Heroes for her ("MOM! I'm the very first person who gets to read this!" I will never not have heart eyes for a librarian), and ever since then she's obsessed.

Last night she was telling me that Athena and Artemis are her favorite goddesses, because, and I quote, "They're not girly goddesses."

So it turns out my work is not done here. I am very quick to smash the patriarchy, and still the pull for girls to avoid being "girly" is strong. I wanted to talk about how there's nothing wrong with being "girly" but at the very last moment shifted my approach.

I asked her if they were girls. She said yes. So then I asked, doesn't that by definition make them "girly?" She thought about it for a second and agreed, even though I don't think she wanted to. And then we had a talk about how she was defining "girly" (silly, prissy, dependent, weak) and how using that term in a derogatory manner promotes the idea that girl-like is something to avoid. We decided that Artemis and Athena are in fact, Girly Goddesses.

And that's how I ended up doing an impromptu lecture on feminism at 9:00 last night. Also she forgot about the poster she was asking me to buy so I might be on to something. 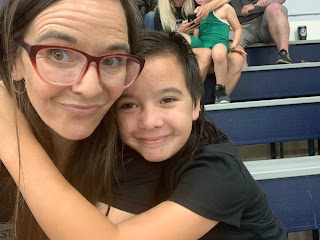 THIS! This is so important!! Well done, Mama!

(A student cued me into what the youngs are calling it--"femmephobia.")