Courage doesn't always roar. Sometimes courage is the quiet voice at the end of the day saying, "I will try again tomorrow." ~Mary Anne Radmacher
Last week I talked with a friend who confessed, with trepidation, that the night before she had lost her temper with her 1 1/2 year old daughter who would not go to sleep, and the mom had screamed. She felt awful, immediately apologized, and later called a friend to decompress. Essentially she did everything "right." As I laughed with her and commiserated with that feeling of desperation, the "Please, I'll give you anything if you'll please just go to sleep" she thanked me for making her feel normal. She said that with some other parents she felt inferior, like they would never falter to yell at their child or "screw-up." I'm lucky because, for my job and in my life, people tell me stuff. A lot of stuff. That's really normalizing, and I've heard a lot of shit. I'd like to pass on the favor. I remember that feeling, that everyone else is doing this mommy thing so much better than me. That I had been found wanting or that I was doomed to destroy this perfect little person I'd been trusted with.
I remember the first time I truly lost it with Eli. He was about a year and a half, and had been throwing the king of all fits every time we got into the car. One morning, after I was wrestled him into his car seat and sat in the driver's seat listening to him scream bloody-murder, I lost it. I screamed. I yelled "Shut up! Shut up! Just shutupshutupshutup!" In my world we DO NOT say that. Ever. It would have been better if I'd swore like a sailor. And I felt awful. I felt scared. I felt like the world's worst mother. And I promised myself it would never happen again. But it did, of course.
When I was pregnant I asked my mentor how she handled leaving her kids at daycare in the morning. Wasn't it so hard to leave them? And she said that yes, sometimes it was hard, but that sometimes it was very, very easy. I didn't understand for a little while how true that is. Most of the time I dread Monday, when there are alarm clocks and sleepy goodbyes, but then there are times when I cannot wait for the next workday. Today, if someone had offered me $100 and a box of Girl Scout cookies for Eli, I may have taken a few minutes to consider it. Today was a horrible, no good day as far as Mama/Eli days go. I don't know what happened, but imagine a whiny two-year old, possessed by a petulant, angsty 14 year old girl, crossed with an anti-social nine-year old boy, and you have my son today. There was door slamming, kicking, "You don't care about me!"," You never let me do anything!", "You're so mean! I don't love you!", "I'm boooooooooooorrred!" I tried, I really did. We went swimming this morning. Kid wanted to be carried around on his dad's hip the whole time. We did a puzzle ("I need help! You do it!") We took a nap. Nothing. I did all the shrinky stuff, maybe he needs extra attention, maybe he doesn't feel good, maybe we need to reframe! blah blah blah. Then I did the other stuff. "Go play!" "Go to your room!" my recent favorite and a gold-star MOTY winner "KNOCK IT OFF!!" At one point he yelled "I'm going to my room forever and never coming out and never loving anyone ever again" and I, in my most kind and nurturing voice, yelled back "Good!" I took him to the drugstore with me after 15 whole minutes of pleasantness and made the mistake of buying him a new toy car. We get back out to the van and before we're even strapped in he starts with "You never let me get anything! Why didn't you let me get the big car? Why can't I have candy? whine whine whine" So I took the car back, told him he'd lost the privilege of a new toy (thanks Imaya) and sent him to bed at 6:30. That boy.Oh that boy. A few minutes ago he came out and asked if I was mad. It was really hard not to immediately yell for him to get his butt back in bed before he loses all tv for the next year. But I didn't, and I explained that I was mad because he'd been behaving so badly and made it such a hard day for everyone, that I loved him but he really, really needed to work on his attitude and his behavior.
That's the thing. Today sucked, but we keep going. We try again tomorrow. So if there're any moms out there, or really anyone out there, who has felt that pang of loneliness, sure you're the only one who's falling short, truth in writing. We all do it. It took me a long time to figure that out. We're all just barely hanging on. But we try again tomorrow. 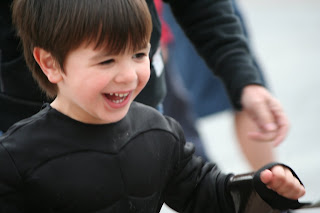 The boy, in happier times
Posted by Chiconky at 8:14 PM

We also had a craptastic day yesterday with H. And we tried! We went to the zoo, to a really fun place for lunch, to Trader Joe's where we threw everything anyone wanted (including a bouquet of flowers and a giant potted pussy willow that H picked out) into the cart! We watched Megamind! We played outside!

And still. The whining, the fighting, the back talk. OMG.

Maybe it's the age? I was really hoping it was a sleep issue, but he woke up again this morning "Can I have a show?" No. "Can I have my car back?" Not yet. "Whyyyyyy?" Slam slam slam. Thank God for daycare.

The giant potted pussy willow cracked me up! Totally something Eli would pull.