These are a few of the items that 1) my sugars tolerate and 2) help me feel like a normal human being. There aren't a lot of personal accounts of GD out there, so I thought I'd share what I've learned through trial and (lots of) error. 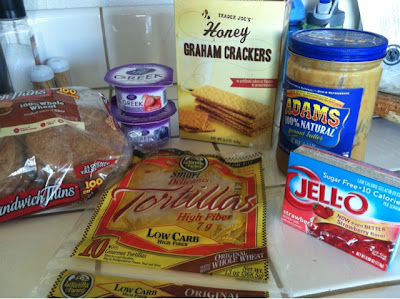 Whole wheat sandwich thins: At 22g of carbs, these are a great alternative when you're making sandwiches. They're also awesome as hamburger buns. In fact, C says that he prefers these to traditional ones. I can't do a whole bun for breakfast, and I can't do a sandwich plus more carbs for lunch, but they're still pretty awesome.

Dannon Light and Fit Greek Yogurt: 8g of carbs and 10g of protein. Yogurt, and dairy in general, have been hard for me which sucks because they were such a big part of my diet before. These are delicious, don't have the "sugar-free" taste, and seem to work as a snack. Again, these work better in the afternoon.

TJ's Graham Crackers: These are only 11g of carbs instead of the 14-15g of other brands.

Adams Natural Peanut Butter: I have had an unholy relationship with peanut butter this pregnancy. This brand is great because the ingredients are literally peanuts and salt. Most peanut butters have a ton of added sugar. And the peanut butter is a great protein source when I just can't handle more meat (that's what she said!) A favorite snack is celery, peanut butter, and a tiny box of raisins. And my go-to bedtime snack for most of the last trimester has been a graham cracker with peanut butter. So good!

Sugar-free Jello: It's worked better for me to eliminate sweets rather than try to replace them. I found that pretty quickly, I stopped craving desserts and sweets and overall it just makes life easier. On top of that, I don't love all the chemicals and replacements that you usually find in "sugar-free" products (my obsession with Diet Pepsi aside, of course). But sometimes you just need something decadent. Sugar-free jello topped with sugar-free whipped topping hits the spot and doesn't reek of chemical aftertaste. And it's "normal" enough that the kids will eat it to. Anytime you're not eating something different is a nice break.

La Tortilla Factory Low Carb, High Fiber tortillas: This is the only carb I've consistently been able to tolerate for breakfast, so there's been a lot of breakfast burritos in my world. For dinner I can do up to three of the smaller tortillas (10g of carbs) if I don't put beans on the tacos. And they taste pretty good too.

So those are my key players. One of the things I've learned is that when something works, stick with it. And if something really works and tastes good too? Stock up on that shit. So much of gestational diabetes feels like a never-ending science experiment and I can't tell you how much it means to have a few things in your arsenal that don't have to be thought about.
Posted by Chiconky at 9:00 AM

Oh wow Corey, you are a total rockstar. I can't even imagine going through all that pregnancy entails and also have to watch what I eat so carefully. Good for you and the end is almost in sight! If you haven't already you should post this blog post to pintrest, I'm sure there are many other women who would benefit from this!

Just another GD mama saying thanks for sharing your experience and what works/worked for you! I had it with my first and am gearing up for a second in which I'm sure I'll get GD again...so planning for round two is making me sad. This is helpful to remember that there are things out there that others enjoy! I, too, had a TON of peanut butter and graham cracker snacks! Funny how the same things work for people! Hope all is well with you :)