I've never really written my kids' birth stories because c-sections aren't as exciting as middle-of-the-night, "Honey, it' time!" stories, but I want to make sure that I remember Avery's as vividly as I do the other two. It's especially important because she got the "bonus stay" just when we thought we might be going home. The surgery itself was so easy and low-key, and Avery was born so fast that we were literally mid-sentence talking about something completely unrelated (or not. It turned out that my anesthesiologist had my grandma's maiden name, and his family was from the same area, so we were trying to figure out if we were related. We may be, but it may be one of those family scandal stories.) My doctor said, "Oh look, there's her bum!" and then "There's a hand!" and then Pop! she was out. Pop! is really the best descriptor I can come up with since that's what it felt like, like she popped out. After they got her cleaned up and gave her a little oxygen I was able to hold her while they finished with me. That part was especially awesome. I had been so prepped for a rough experience because Sydney's was so different. With her, the surgery took a LOT longer than we expected, they had to use the vacuum to get her out, and I had some reaction to the medicine that made me loopy and paranoid. All in all, not awesome. On top of that, it took me a lot longer to recover and I was in a ton of pain. With Avery, I practically jumped out of bed at my first chance. I kept thinking how lucid I felt. The first day, she slept most of the day and then the next day she took to nursing like a champ. It was all so ridiculously easy. And I met my goal of not looking like crap in all the pictures. There was dry shampoo, make-up, real-people clothes, and even a shower at the first possible chance!

Avery's breathing had been a concern since the recovery room, but the general consensus from the pediatritians was that we should just wait it out. Some of the nurses were a lot more concerned and I vacillated between mama-bear, "Don't touch my baby" and concern that Avery was going to suddenly and horribly do...something. I almost hugged the doctor who finally explained that while they couldn't send her home as she was, if something was going to go wrong, it was going to happen slowly and would be caught by the staff. He said, "I don't want you to be watching for anything. Let us do that. You enjoy your baby." Seriously the sweetest, most helpful thing he could have said.


They put Avery in the NICU on Sunday afternoon because her breathing was still rapid and inconsistent. I guess it's not uncommon for babies of mothers with gestational diabetes to have some problems regulating their breathing at first, but it generally resolves itself in 24 hours, or less commonly 48. So after two days, with different people showing vastly different levels of concern ranging from "She looks totally fine and just needs a little time" to "We need to admit her ASAP!", when we were starting to talk about going home, the pediatrician ordered a chest x-ray. Based on that the radiologist "couldn't rule out pneumonia" and so they decided to admit her to the NICU so she could be on antibiotics.  The admission sucked and there were a lot of tears (hers and mine). We were hustled down and a team of four nurses descended upon my tiny, brand-new baby to get all the labs that they needed before they started her on the medication. There was a lot of blood taken and then they put a teeny-tiny IV in her teeny-tiny arm. But thank goodness that was the worst part. I was able to sit with her pretty much 24-7 and, thanks to the pediatrician's urging, I was able to nurse her on demand rather than have to pump and deliver (which is what one of my nurses had said would be the case and was something I was not happy about.) On the second day, the neonatologist noticed that her bilirubin levels were going up and preemptively ordered that she sit under the lights for a day, so that when her breathing stabilized we wouldn't get stuck because of jaundice concerns. Our tiny glowworm didn't love that, but the lights worked and her levels went down by half. But because she was upset, her breathing got wonky again, buying us another night. The next morning her cultures came back clear so she was able to come off the antibiotics and they took the IV out. After that, the nurses started to note that when she was sleeping her heart rate dropped "below standards" (the set floor is 80 and hers was dropping into the 70s) which freaked me out. I was starting to be convinced that the longer we stayed there, the more reasons they'd find to keep her there. The general chorus was "She looks fine and healthy. It's just this one symptom." Luckily the neonatologist and the cardiologist determined that it was a totally normal heart rhythm. Turns out the NICU doesn't see a lot of full-term babies and so their standards are a bit different.

Finally on the fourth day we got the all-clear to go home, as long as Avery was able to maintain her temperature without benefit of the warming bed (another overly cautious move on the part of a night nurse). So we bundled her up as best we could and waited. We also cuddled her as much as possible, knowing that she'd do better in our arms than lying in the bed. After six long, long hours we got the all-clear and loaded her up (after an embarrassing few minutes where we couldn't figure out the damn carseat.) They offered, seriously, to play "Pomp and Circumstance" as we walked out the door. Even though we turned it down, I hummed it in my head as we walked out :) 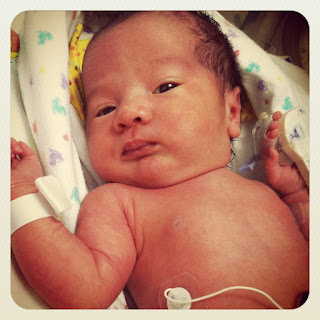 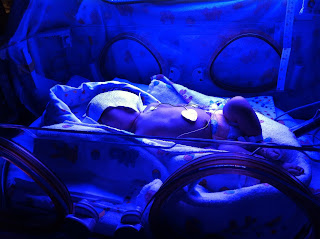 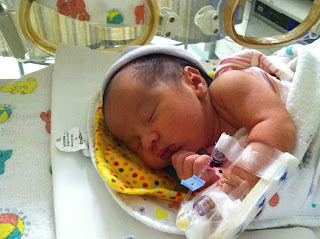 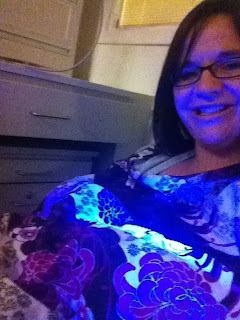 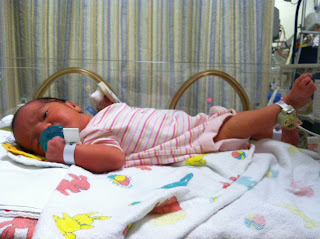 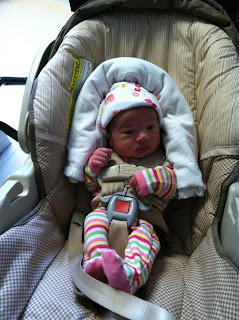 It was so humbling and weird, to know that there was something going on but not having any answers. There were quite a few other babies in the same room as Avery that had been born on Friday, and so it was bittersweet when someone was discharged. And then there were the families who had been there two weeks, or in some cases months. There became a weird comraderie between the people you saw on the elevator, going to "that floor." And for the most part, the nurses in the NICU were amazingly wonderful and supportive. I will be eternally grateful for them, especially the night nurses who quietly let me snuggle my baby and who encouraged me to both rest and advocate for my daughter. As I tend to do, I got really focused and upset about the fact that the staff kept referring to Avery as "he." A very sweet and intuitive nurse must have noticed, and the next thing I knew Avery was wearing a pink onesie and a flowered hat. Exactly what I needed at exactly the right time. And a few days after we got home we got a card from the NICU staff, signed by several of the nurses who had helped take care of Avery and some we hadn't met. I'm sure that they do it for everyone, but I was touched that they did it.
Posted by Chiconky at 12:40 AM

I am so sorry you had to go through a stressful time, but how wonderful to have such supportive hospital staff! Glad you are all home and doing well now.