This week I spent a couple days at San Quentin State Prison. As part of my job, I walk the tiers and talk to inmates. San Quentin is one of the oldest prisons in the state and the tiers are very much what you'd picture if you picture prison. It's always striking to me the way that modern trappings are superimposed onto such a historical setting. Also, once you're at the top you can't help but look down and get a little dizzy. I can't even imagine what it would have been like with all these inmates out of their cells on the tiers if something were to happen.

BUT, that's not what I want to write about! Someone I was touring with this time casually asked if I'd ever seen "the murals." When I told her I hadn't, she found an officer to let us into the dining halls. I 100% was not prepared for what I saw. Six HUGE, complex murals covering the walls of three separate dining halls, and portraying the history of California, all done in amazing monochromatic detail. I have never wanted to take a picture in prison (STRICTLY forbidden) so badly in my life. Thank goodness for the internet!

Alfredo Santos was a young inmate in San Quentin in the fifties and he was chosen to paint the murals when he won a contest run by the prison. They gave him two colors, brown and black. It took him two years to paint. For years after he paroled, no one knew what had happened to him (turns out he ran to Mexico for a bit, opened several art galleries, and even worked at Disneyland for a while.) However, when he heard that the Smithsonian was interested in the murals, he wrote the prison and asked for a picture of them. Since then he has toured the prison and actually been given an honorary San Quentin key. The Smithsonian has bought the rights to the murals, if the prison ever shuts down. 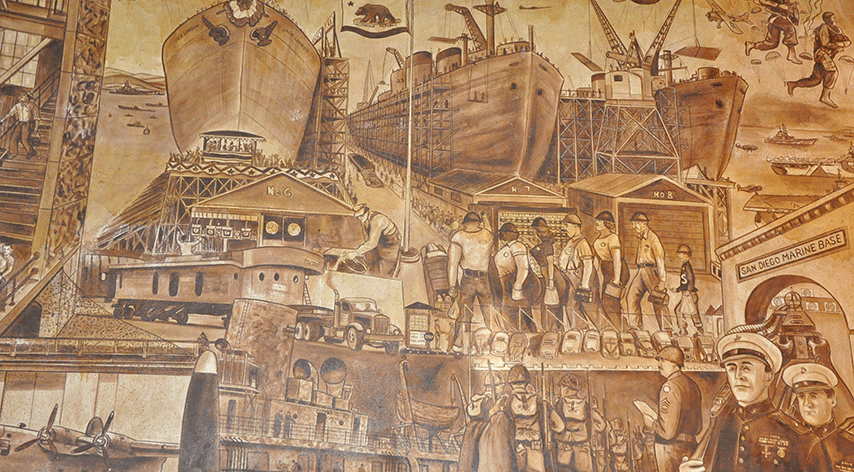 This is the best site I found to see the pieces in detail, but up close you lose the sheer enormity of it. It's really breathtaking and I was sorry I didn't have longer to look. There are so many teeny little pieces hidden throughout it (including, apparently, a caricature of the warden as a prim old woman in a courthouse). There's also all these pieces that are painted in a way that messes with your perception of dimension; eyes that follow you and vehicles that always seem to be coming toward you. I had no idea that it was over fifty years old when I saw it.

I love prison architecture and I'm fascinated by how different prisons have been designed through the years. There's so much that goes into it, and a lot has to do with the political climate of the time. For example, more modern prisons afford more in ways of "human comfort" while older prisons are obviously designed primarily with confinement in mind. I always wanted to look into it more but, shockingly, there's little written on it. Until now though I haven't paid much attention to prison "decor," frankly because most prisons don't have a lot of sanctioned art work. I'm absolutely obsessed and fascinated by the history of these murals though. There are several more on the prison grounds by other artists that I can't wait to find out more about.

Random finding this post but glad to see its pretty recent. I saw these on a tour in 2010 and my reaction was just like yours. I often wonder if they're being cared for and a story about Cheech's Chicano Art and it reminded me of these wonderful pieces of art history. Glad to hear about the Smithsonian. Thanks for sharing! Here's my blogger post about it http://kirknoggins.blogspot.com/2010/01/he-goes-to-prison.html