Tuesday afternoon I got a text from C that said "Want to go see Billie Eilish with Sydney tomorrow night?" Turns out he had a friend who bought tickets forever ago and then last minute couldn't use them. Sydney has loved Billie Eilish since she was small (she reminded me that she once sent her a DM on instagram telling her that she bought her book and that Billie responded with a heart emoji) and now I'm afraid that all future events will pale in comparison. She declared it "The Greatest Night of My Life" 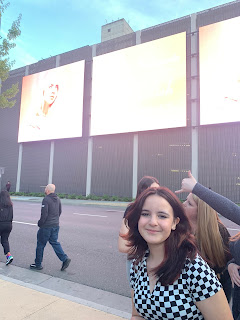 In line waiting to get in
She had no interest in wandering around the venue and wanted to make sure we were in our seats as soon as the opening act started. Then when Billie came on stage she was fully rapt, and occasionally she would whisper, "I think I might cry" or "I just love her so much." She sang every song.
I like Billie Eilish's music, so I figured I would enjoy the concert, but I wasn't expecting to like it as much as I did! She did such a great job of managing the mood of the show, and had such a positive, lovely energy. There's a part where she outlines her rules for the show and she said "First, don't be an asshole. Second, no judging anyone here. Finally, you are 99.9% in control of whether you have a good time tonight or not. So put yourself in the mindset of having fun and let's have a good time." Maybe I'm hormonal or maybe I'm sentimental but that was the part where I thought "maybe I'm going to cry too" And then she kept talking about how close she and her brother are and I totally did cry. So fair warning if you're going to the show. You're probably going to cry. 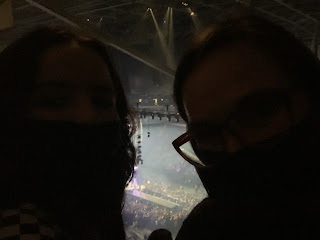 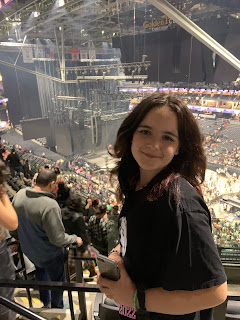 Happiest. Girl. Ever.
Posted by Chiconky at 9:28 AM

How awesome! I love those rules...

I went to a Lorde concert about nine-ten years ago and was laughing at myself a tiny bit for being so much awe of a 17-year-old!